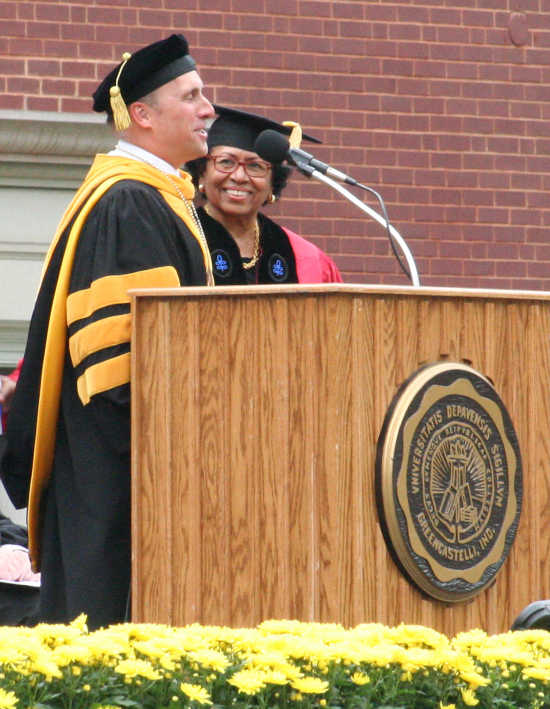 Commencement speaker Ruth Simmons, president emerita of Brown University, steps to the podium to stop DePauw University President Brian Casey from reading her biography to the audience, moving the program along under a threat of rain Sunday morning. (Banner Graphic/Eric Bernsee)

That was the urging Sunday of an educator who admits her dreams were modest when she faced race and gender biases on her way to -- as DePauw University President Brian Casey termed it -- "becoming one of the most highly regarded leaders in higher education."

Speaking to 504 members of the DePauw Class of 2015, their parents and guests at Holton Memorial Quadrangle, President Emerita Ruth J. Simmons of Brown University (2001-12) wished graduates "the best in honing your skills as a dreamer." 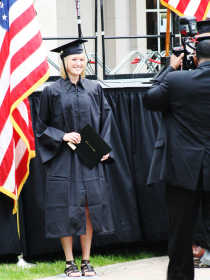 Among the 504 students receiving their diplomas Saturday at the 176th DePauw University commencement was North Putnam graduate Paxton Stephenson (left) of Fillmore, who graduated with a Bachelor of Arts in sports medicine. (Banner Graphic/Eric Bernsee)

The American Dream isn't dead, she said, but it needs some resuscitation.

She called Dr. King "the wonderful embodiment of a vision of a unified nation," raising her voice to stress the necessity of the unified part of that description in the wake of the "painful civil turmoil" that America has found itself in the throes of recently.

King delivered his "I Have a Dream" speech during the 1963 March of Washington, envisioning love and compassion and a beloved community as the answers for curing the strife of segregation within America.

"We stand here today," Simmons said, "in need of reaffirming the importance of that dream of a beloved community."

When Simmons was growing up in the segregated South of the 1960s, in a country that was "far from what it is today," predictions for her future "were dire," she said.

After all, the naysayers said, she had attended a small, little-known college in New Orleans (Dillard) and decided to major in French.

"That offended me," Simmons said of those predictions, adding that she had made a choice that was meaningful to her.

Yet by nature she is very much a dreamer, Simmons said, although her dreams admittedly were modest by today's standards.

"I aimed for no high-hifalutin recognition, no wealth beyond the means of living comfortably, no accolades for high achievement," she explained. "I had to impose my own high standards for the totality of my life.

"That was my American Dream," she said, noting that the often-elusive American Dream has become "shorthand for dreaming of a better life for myself and my children."

While Simmons suggests there is "nothing wrong" with being wealthy, happy and successful in your career, she said applying what graduates have learned at DePauw in working toward benefiting life in a "beloved community" is an admirable dream as well.

"What will you do to advance this dream?" she asked. "When will we turn to a better dream?"

One aspiration, Simmons said, must be to not give in to segregation and instead "proclaim unashamedly, the belief in a new American Dream."

"It's a different kind of segregation now," she observed, in which people often retreat to their own faith, their own associations and their own neighborhoods, making "the country as segregated as it ever was."

She urged the DPU Class of 2015 to "wherever you go, whatever you do, be a believer in justice, that every human being matters" in working toward the beloved community of which Dr. King spoke.

"I wish you the best in honing your skills as a dreamer," Simmons concluded.

Meanwhile, Walker Cup winner Ashton T. Johnson -- the first black winner of the award that goes to the senior who has contributed the most to the DePauw community during his or her four years on campus -- told fellow members of the university's Class of 2015 their story "has been shaped and molded by the interactions, conversations and time spent with professors, classmates, acquaintances, friends, opponents, adversaries and even those haters."

"Our DePauw story has been shaped by the people in your classes who opened up and shared their personal stories of strengths and vulnerabilities in order to create something truly remarkable, communion," the Springdale, Md., sociology major said. "Each person you have encountered during these past four years is not only a part of your DePauw story but also a part of your life story."

And telling that story, Johnson added, is part of "figuring out who you are."

Johnson, who will now serve in the Teach For America corps in New York City, concluded by telling the Class of 2015, "I leave you with these final words: Tell and share your life story with each person you meet and every place you go, tell it by your words, your actions or just you being you, because your story, your life matters."

Each of the other two honorary degree recipients spoke briefly of their high regard for DePauw. 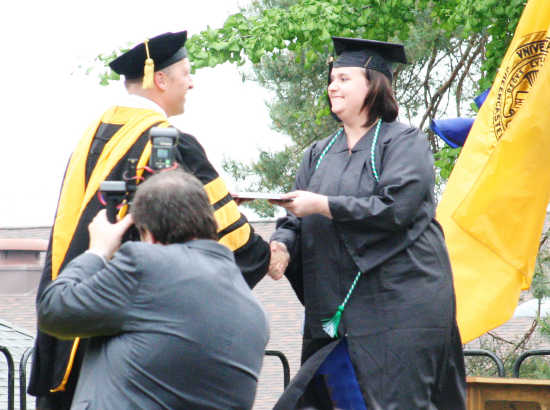 In receiving an honorary Doctor of Music degree, cultural historian and author Joseph Horowitz praised the DePauw School of Music and its 21st Century Musician Initiative.

"I'm confident that whatever transpires here will be of national significance," he told the commencement crowd. "Mark McCoy (dean of DePauw's School of Music) has a strategy of renewal" for music education in America, Horowitz said. "He's rethinking what a music school could or should be in the 21st century."

On campus last fall as artistic director of the DePauw's "Dvorák and America" Festival, he added, "I'm thrilled to be part of Mark's experiment."

"What I discovered in my classes from my students was an attitude toward nature that was balanced well, I think, by something that is natural within us -- our wildness and our desire to make things well," Jones said, adding he was proud to join those getting degrees Sunday because he feels "much a part of what you're a part of, which is the wonderful experience of DePauw."