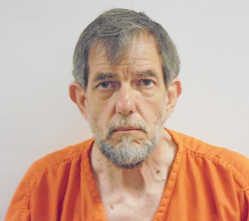 A 64-year-old Greencastle man is facing charges that he molested three different girls in the care of his wife's babysitting service.

Michael M. Nussbaum is charged with eight counts of Class A felony child molesting. Class A felonies are punishable by 20-50 years in prison, with an advisory sentence of 30 years, and fines up to $10,000.

Nussbaum was arrested by Indiana State Police Thursday morning and booked into the Putnam County Jail at 10:26 a.m.

The probable cause affidavit in the case alleges that Nussbaum, on multiple occasions between Jan. 1, 2006 and Aug. 31, 2012, performed various sexual acts with the three girls, all of whom were between the ages of four and seven when the alleged acts occurred.

All three girls were in the care of Nussbaum's wife's non-licensed in-home daycare operation.

His wife no longer operates the daycare.

The Nussbaum inquiry is one of the cases for which Putnam County Prosecutor Tim Bookwalter called for a grand jury back in January.

While the proceedings of a grand jury generally remain sealed, the 12-person panel apparently saw fit to bring charges against Nussbaum.

"I would like to thank the grand jury for their time and attention," Putnam County Prosecutor Tim Bookwalter said. "They met over 3 weeks to discuss this and other cases."

As described by the girls to investigators, Nussbaum's actions are alleged to have included intercourse and other sex acts.

All of the alleged acts reportedly took place at the Nussbaums' Monroe Township home.

Indiana State Police Trooper Michael Taylor initiated his investigation of one girls' allegations against Nussbaum on May 19, 2014 after a call from Putnam County Child Services.

All three girls were at some point interviewed by child forensic interviewers at Susie's Place Child Advocacy Center in Avon.

Among the accusations the young girls made against Nussbaum, one girl apparently told investigators that "Big Mike" threatened to hurt her sister and her dog if she told anyone what he had done to her.

On July 18, 2014, a team of Indiana State Police troopers, including detectives and one crime scene investigator, served a search warrant on the Nussbaum home.

During the raid, Nussbaum refused to accompany troopers to the Putnamville Post, but did agree to an interview with 1st Sgt. Jeff Hearon.

Nussbaum reportedly told police that two of the three families had a "personal vendetta" against him and had fabricated the allegations to discredit him. He did say that the third accuser and her family had no motivation to accuse him.

Charges were officially filed in Putnam Circuit Court on Tuesday, with an arrest warrant and bench warrant issued on Wednesday.

Anyone who believes their children may have been a victim or has information relative to this case is asked to contact 1st Sgt. Hearon at the Putnamville Post at 653-4114.