Lancaster to celebrate 'Testimony' with release party at GCC 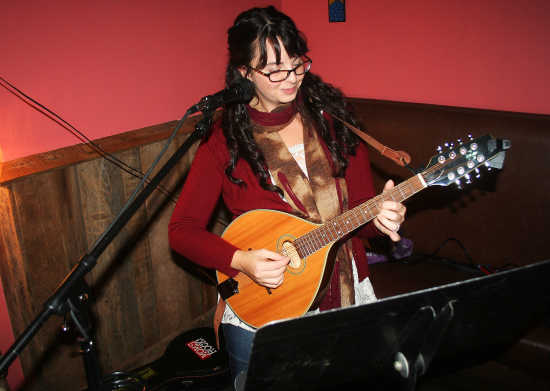 Bobbi Lancaster will be hosting a release party for her new album at 6:30 p.m. Sunday at Greencastle Christian Church. (Banner Graphic/Eric Bernsee)

Take a look at the liner notes of Bobbi Lancaster's new album "Testimony" and you see a lot of names you might expect.

But the notes for track No. 9 "Grace" bears a different imprint all together. Besides work by Lancaster and Rollins, God is given credit for playing the "thunder" on the track.

Although near the end of the album, "Grace" was the first thing Lancaster and Champagne recorded last fall.

"I played guitar and I never, ever, ever play guitar," Lancaster said. "A thunderstorm rolled in when we were starting to record. If you crank it up, you can here it on the track.

"Grace" is only one song in 10, but the idea of the almighty providing ran throughout the recording process, especially considering that Lancaster didn't feel ready to start recording last June when the project started.

"I didn't want to do it," the singer-songwriter told the Banner Graphic. "I was still tired from the last album. I had enough content, but I was drained."

But there were other things in store for Lancaster.

"Every time I've been resistant to something God really wanted me to do, I've had a chance to see why," Lancaster said. "If we hadn't done it right then, we wouldn't have been able to do it."

Rollins and McClaine's jobs soon carried them out of the area, at least for a time. Likewise, Lori Miller left Greencastle soon thereafter when husband Mark took a minister job in Brazil.

"As the cast of characters began to disperse around the U.S., it gave me confirmation," Lancaster said.

Having worked with Champagne at DePauw when she started the project, she called him again a couple of months later.

"I was very surprised when he said he'd be happy to take this on," Lancaster said.

After recording eight songs last June, they finished that part of the process over fall break. From there, mixing took until February.

Lancaster said the 10 tracks are not in the same vein as her last project, "Take Me Up to Your Holy Mountain," which was more of a congregational praise album.

She describes this effort as very personal and "more experiential."

"You'll be able to hear scripture throught he whole thing, but I think it's more subtle than the last album was," Lancaster said, going on to describe the record as rootsy and understated.

Among the songs, she highlights "Ancient of Days" as a favorite.

"I think 'Ancient of Days' might be my favorite song I've ever written in my entire life," Lancaster said.

Guitar work by Williams and Rollins highlight the track.

"When Kevin played that electric guitar 'thing' that he does, I just fell like it was God singing," Lancaster said. "It's just this beautiful thing."

Listeners will get their first chance to hear most of the tracks at Lancaster's album release party Sunday at Greencastle Christian Church. The event will feature congregational singing as well as the unveiling of some of the new songs.

"Several of these songs have not been played out in public before," Lancaster said.