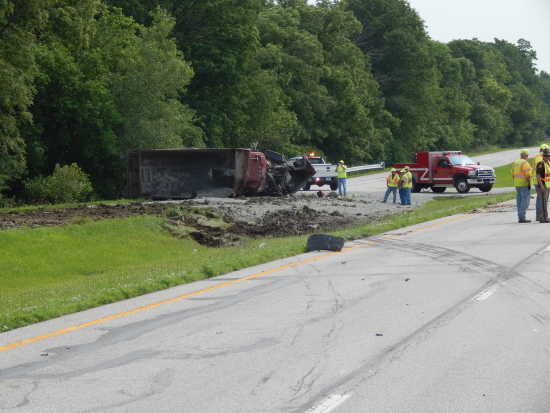 Steven Hansen, of Roachdale, was traveling eastbound on U.S. 40 when the left front tire blew, causing the truck to roll over and slide into the westbound lane. (Photo courtesy of Indiana State Police) 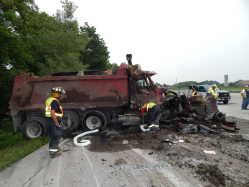 The trooper working the scene stated the driver would have sustained serious injury had he not been wearing a seatbelt. (Photo courtesy of Indiana State Police)

The Bowling Trucking dump truck then veered into the median, rolled over and slid into the westbound lanes.

The truck was loaded with approximately 20,000 pounds of gravel.

Hansen sustained minor injuries in the crash, but refused treatment at the scene.

He was subsequently taken to Hendricks Regional Health by his employer and spent Wednesday night there.

A family member reported that Hansen got home on Thursday.

According to investigating officer ISP Sgt. Cory Robinson, "Hansen most likely would have sustained substantial injuries had he not been wearing a seatbelt."

The Indiana Department of Transportation rerouted all traffic into the eastbound lanes during the crash investigation and clean-up. All lanes were open and clear by 1 p.m.