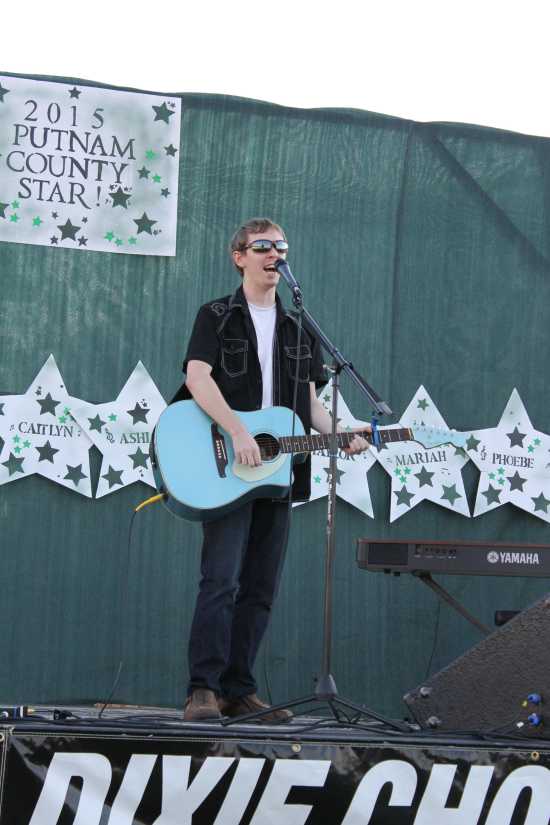 Taking a pair of hit songs and making them his own, Tony Patrick was named the 2015 Putnam County Star at the Putnam County Fairgrounds Wednesday evening.

The 22-year-old Cloverdale resident put his stamp on Walk the Moon's current hit "Shut Up and Dance" as well as Imagine Dragons' 2012 hit "Radioactive."

With guitar in hand, Patrick opened his night with the Walk the Moon cover, turning the infectious new wave hit into more of a mid-tempo number.

The change to "Radioactive" was even more pronounced, as Patrick removed the electronic stomp of the original and turned it into a piano ballad.

In the end, Patrick's take on the two songs, along with his consistency over the four nights of the contest, earned the stamp of approval of the judges and the audience, who cast its votes in the form of contributions to the bucket of each competitor.

After the announcement, Patrick was proud but remained deferential.

"It's just amazing. There's just so much talent in this contest," Patrick said. "To me, it's not really about the award; it's about the music and the emotion that you can express to the crowd and the friendships you make from this competition.

"Winning it just means that I have an easier way to promote this sort of positive attitude, a reinforcement back into this community that I live in."

With the victory, Patrick joined 2014 winner Cord Watkins and 2013 champion Melissa Claycomb Warner, literally joining them onstage after his name was read.

Patrick came out on top of a crowded field, that included six repeat competitors. Phoebe Migliano (2014) and Patrick (2013) both made the 12-person field once previously.

Marin Nally, Shelley Robbins, Mariah Minnick and Taylor Strong have made the field all three years of the competition's history.

Patrick, who is legally blind, praised his fellow competitors and contest organizers for not allowing it to be a hindrance.

"I really feel like in Putnam County Star, they have been so accepting of my disability. The fact that I'm blind, they didn't allow that to hinder me in any way," Patrick said. "They said, 'You can do this. We will help you.' That's what made me feel really welcome was having the community help me out in this endeavor."

This kind of attitude, even among a dozen people competing for a $500 prize, inspired organizers to add a mental attitude award this year, voted on by the competitors.

Shelley Robbins was the inaugural winner of the "Miss Congeniality"-type award. She said that helping her fellow singers (one of whom was husband James this year) comes naturally.

"I've done this for three years and I've always found it great to see people grow," Robbins said, specifically mentioning Nally, who at 15 is already a three-time finalist.

"We're all very like-minded people," Robbins said. "I was surprised to win the award because I just want to help people, but it's not to win an award."

Fair Board Entertainment Director Rick Johnston, who dreamed up the Putnam Star four years ago along with current Fair Board President Ray Poynter Jr., praised the talent and the attitude of his 12 competitors.

"Every year you wonder if you can top the year before," Johnston said. "The singers have gotten better every year."

As it's gotten better, it has also grown. Approximately 700 people saw the finals Wednesday, not to mention the several hundred from the previous three nights. As the competition grows, the goal is to give more back to kids of Putnam County, with all money collected in the penny buckets supporting local 4-H programs.

For this year's Putnam County Star, the competition, all the positivity is a credit to the community.

"The people that I met are just amazing. Not only the people who are in the Putnam County Star, but the people at the fair in general," Patrick said. "It's just a really welcoming family community atmosphere."