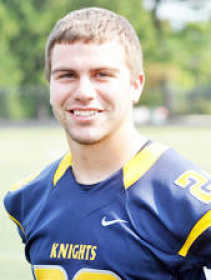 Gibson is the son of Jack and Sheila Gibson of Greencastle.

Coming off a national runner-up season in 2014, the Knights are the top-ranked team in NAIA football.

Gibson's 154-yard effort was the second 100-yard rushing performance of his career, was the 40th in MU history and was the 11th-highest single-game output in team history.

He is the 14th Knight to earn the league honor on the offensive side of the ball.

The No. 1 Knights (1-0) are off this week, but will play host to The Monumental Matchup presented by Indiana Members Credit Union today at St. Vincent Field at 6 p.m.

The Knights will host 2014 Great Lakes Valley Conference (NCAA DII) champion University of Indianapolis in the first-ever meeting between the two programs.