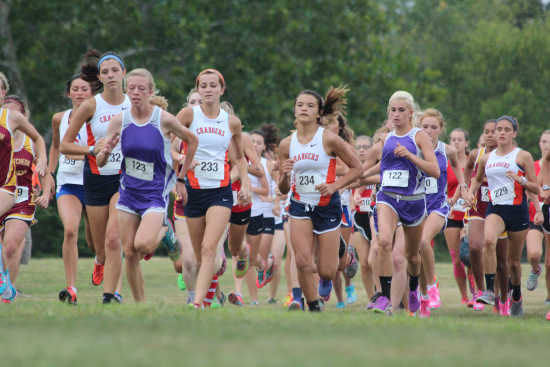 Greencastle's Emma Wilson leads the pack at the McChutcheon Stampede earlier this season. Wilson finished third in the Ben Davis Invitational which hosts the best cross country teams in the State. (Courtesy)

In a race with the best teams in the state, Greencastle finished 10th in the girls' race and 11th in the boys'.

The South Putnam girls finished 18th while the Eagle boys finished at 14.

With a time of 17:43, Wilson was only four seconds behind the leader, finishing right on her heels.

"She was side by side with State Runner-up junior Taylor Nicholson of Avon for almost the entire race. Right behind them was Lauren Johnson of West Lafayette and Alex Buck, two veteran seniors who have been up amongst the best for several years," GHS coach Garry Anderson said. "Those four finish in a fast and furious pace all the way to the wire. Nicholson pulled away from Johnson and Wilson the last 25 meters to win followed by Johnson and then Wilson. Emma finished with a time of 17:43.0 Her season best, a school record and one of the fastest times in the state this season."

The Greencastle girls all finished in the top 90 runners and the athletes believe Saturday provided the maximum potential for a great run.

"The temperature was in the high 50s and low 60s for the boys and girls races," Anderson. "Perhaps this combination is what produced the times of 65-70 percent of the Greencastle runners when they recorded season or personal best times for the Ben Davis Invitational. Most of our runners quickly pointed out that they felt the weather and the flat course is the reason why they performed so well. The high quality of teams to compete with added to the challenge to lower one's time also."

The top South Putnam runners for the girls were Maddie McHugh finishing 78 and Julianna Delano at 89.

"We mixed results overall, Eagle coach Brandon Welti said. "A lot of good times, but we didn't exactly compete the way we hoped. Many were still feeling banged up from Thursday. Overall it was a good experience as we see some areas to improve on for the big meets in October."

The Tiger Cub boys saw Clayton Wilson earn a 36th-place finish with a season-best 17:08.6, Cameron Lewis coming in at 59 and Braden Pershing at 71.

"I was really pleased that Pershing did so much better than in some of his previous meets due to an illness," Anderson said. "Hopefully he will continue to improve to surpass times from last season. The same can be said for junior Jacob Crawley with his improvement from an injury. I was pleased with his time of 18:14.3. Sophomore Ben Gellman got a personal best 18:12.0 and really shored up the top five for a 11th-place team finish. He was quickly followed by freshman Ethan Tuggle who is making strides after a early season injury. He ran a season best of 18:33.9."

South Putnam's next meet will be Tuesday in the Northview Invitational and county rivals Greencastle and North Putnam will accompany them.