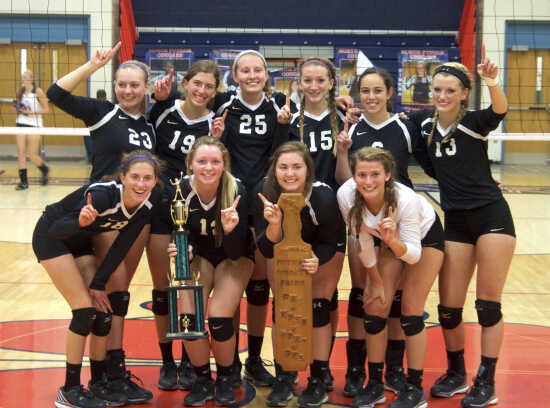 The Greencastle volleyball team defeated Cloverdale in the first match on Saturday. The Lady Tiger Cubs then beat North Putnam in the Championship match for their third title in a row. (Banner graphic/NICK WILSON)

ROACHDALE -- All eyes were on the court at North Putnam High School Saturday when North Putnam and Greencastle put on a fine display of volleyball for the county title.

Greencastle defeated Cloverdale in two sets by scores of 25-19 and 25-23 in round one of the tournament to reach the championship against North.

It was all Cougars in the first set of the championship match, winning by six points to take the game-lead at 1-0.

"I was so proud of how our team played today," Cougar coach Brandy Dickson said. "We maintained our aggressiveness and focus, just had a breakdown in that third set against Greencastle that we couldn't recover from." Putting on a sort of comeback, the Tiger Cubs stormed out to a 9-6 lead in the second. Senior Allison White contributed 10 kills on the day, several in the pivotal second set.

Greencastle coach Maggie Walters said, despite a rough start, her girls were there to win.

"They came out starting a little bit slow today, but the fact that they were able to come back from being down five or six points really shows that they have heart," Walters said. "They're determined to win every game."

Adding 20 assists throughout Saturday's tourney was Greencastle junior Lydia Trout, who proved to be an invaluable setter. Her contribution of 6.7 assists per set was undoubtedly a deciding factor in Saturday's results.

Although the Cougars managed to tie things up in the second set at 15-15 and 16-16, the Tiger Cubs proved too strong, taking the set by just two points at 25-23.

North Putnam was led in attacks by Taylor Nauert who earned 21 kills against GHS. She also had 11 digs with Haley Abdon earning nine.

"I am really proud of our entire team and especially our seniors - I know they are disappointed in the outcome but they should be proud of their effort today," Dickson said. "We just have to come back Monday and work toward our conference and match specific goals. Congratulations to our JV team. They had a great tournament."

Senior Kenlee Johnson had the lone ace on the day for Greencastle, coming in the second set and adding to her team's overall serving percentage of 92.3.

The third and final set was hard fought by both teams, though Greencastle took it by a score of 15-9 for the match victory and county title.

Coach Walters said at the end of the day that, before the third and final set, she told her girls exactly what to do.

"I just told them to minimize their errors and that the first team to seven points ... 90 percent of the time (they're) going to win the game to 15," coach Walters said. "They pushed to seven first and that's why they won."

The Tiger Cubs and Cougars will face off again in a regular season matchup on Oct. 1 at Greencastle.

Greencastle hosts Edgewood today at 6 p.m. and North Putnam heads north to Crawfordsville High School on Tuesday for a match beginning at 7 p.m.