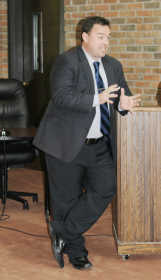 In a state where the Republican caucus of the House of Representatives was sued this spring for public records access, questions about the Access to Public Records Act (APRA) and the Open Door Law (ODL) are as important as ever.

Indiana Public Access Counselor Luke Britt addressed APRA and ODL during a Monday appearance at Greencastle City Hall, saying transparency has recently been under attack by some in government.

Britt opened the talk, co-sponsored by the Greencastle League of Women Voters and the Banner Graphic, by saying he starts each day by reading the preambles to the two main public access statutes, as idealistic as it may sound.

In reading the APRA preamble to his audience, Britt mentioned something he believes some in government have lost sight of.

"A fundamental philosophy of the American constitutional form of representative government is that government is these servant of the people and not their master," Britt read from the statute. "Accordingly, it is the public policy of the state that all persons are entitled to full and complete information regarding the affairs of government and the official acts of those who represent them as public officials and employees."

That law was passed in 1983, yet Britt said the attitude of being a "servant of the people" has eroded in recent years.

"There is a bit of an assault on government transparency and that epitomizes that we are moving away from that philosophy," he said, adding that the movement has been to run government like a business. "You can't treat (government) like a well-oiled business machine. It's not for-profit. Our currency is generally information. I think government needs to go back to that attitude."

Instead, Britt said, governments have gotten territorial and protective of how they spend money and how they reach decisions.

That's where the Indiana Public Access Counselor's Office comes in. While admitting that his position doesn't "have a lot of teeth," Britt said he was tasked by Gov. Mike Pence with raising the profile of the PAC office upon his appointment in August 2013.

Pence also emphasized that the position was to be independent of the governor's influence.

The PAC has found this to be the case, saying he's never received negative feedback from the governor, even when his opinions have not favored Pence's decisions and positions.

Britt uses his advisory position to give non-partisan opinions when citizens make open door or public records complaints. He does so by listening to the complaint as well as the response from the government, before issuing an opinion.

"I like to flavor my opinions with some editorial comments," Britt said.

Even so, he reiterated that his opinions are simply advisory.

This distinction generally matters little, as Britt said even those officials who run afoul of ODL or APRA have not done so intentionally, and are usually willing to fix the problem.

If the problem persists, Britt said, it has to go to court, as only judges have the power to enforce the Open Door Law or Access to Public Records Act.

"I rarely find that it's the case that someone is trying to subvert the law. That is very, very rare," Britt said. "I find that it's usually an education gap."

Bridging that gap was precisely the goal of Britt's presence in Greencastle on Monday. While open to all residents, public officials were particularly encouraged to attend.

A number of candidates for city office were also in the audience.

Perhaps most importantly, Britt said citizens have the access to his office and directly to him. As a two-person department, it doesn't take much to get straight to the top.

"When you do call up or you send an email, chances are you'll get me directly," Britt said.