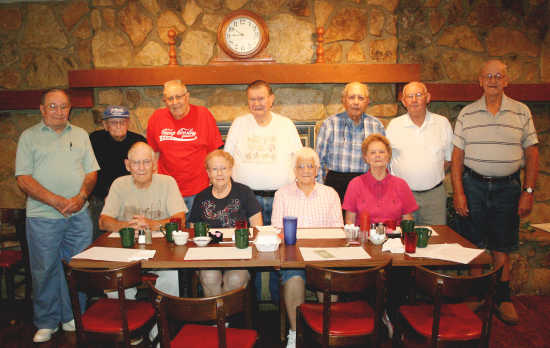 Perhaps the final chapter in the long IBM-Greencastle story was written earlier this month when a handful of IBM Corp. retirees convened over breakfast at Jackson's Family Restaurant.

About a dozen faithful members of the IBM Retirees Organization (IRO) shared coffee and chatter about the halcyon days of Big Blue in Greencastle, what happened when it closed and what they've been doing over the 28 years since the computer giant pulled out of the 300,000-square-foot facility that now houses the Ascena distribution center in a thrice-expanded section as well as the Area 30 Career Center programs.

The business portion of the meeting technically had been wrapped up in earlier voting by the final 40 dues-paying members. Thirty-two members voted to disband the organization by an 18-14 vote.

The IRO's remaining funds have been evenly split between the Putnam County Senior Center and the Clay County senior programs, while photos and other records and items relative to IBM are destined for the Genealogy Department at the Putnam County Library.

The disbanding was put to a vote of the entire membership, IRO spokesman Dick Andis of Greencastle said, "and we'll abide by that vote. It's a fitting final chapter of IBM in Greencastle."

The numbers had certainly dwindled due to death, old age or infirmity in the years since the fateful closing announcement on Nov. 11, 1986 and the ultimate plant closing in March 1987.

"It's hard to believe we've been retired about as long as we worked out there at the plant," he said to nodding heads all around him in the restaurant.

"Many of those men had gone to school together from kindergarten on up and had gotten jobs together out there," Mary Alice Harcourt added, noting that many of them were employed at IBM for more than 30 years.

And retirement hasn't been easy on some of them.

Andis produced figures showing that of the 446 employees who in 1987 took early retirement, 205 have died since the closing, at which time 985 people made up the IBM workforce. Of those former IBMers, sadly 112 have died since 2006. That's 55 percent of the IBM retirees' deaths occurring over the last nine years, Andis said.

He rationalized that it shows that the decision to disband the club -- just as in retrospect the gut-wrenching decision to close the plant has proven correct, it was agreed -- "was the right decision."

Fellow IRO member John Davies of Fillmore called the organization's demise "a sad situation," knowing that it was the final official gathering of the group, some of whom had been connected to IBM since it opened its doors in Greencastle in 1954.

Tom Roach was there, noting that he was the first Greencastle person hired to work at the new plant on the city's East Side oh so long ago.

There was no Veterans Highway then. No Putnam Plaza. Not even the first Greencastle Walmart. There were no stoplights on the east end of town what with the commercial district ending at the old Dairy Queen on what is now Longcastle Drive.

"You realize that was 60 years ago or 61," Andis remarked as Roach recalled being put to work setting up equipment in the local IBM plant.

Others hired at the same time, meanwhile, were sent to Endicott, N.Y., for training. And a long association with the computer giant was born.

Through those years, Andis said IBM operated under a creed that included three basic principles, enumerating them as:

-- Excellence in all we do.

-- Providing the best customer service in the world.

Meanwhile, IBM's white-collar workforce shopped for suits and ties and white shirts at Cannon's and Mac's men's stores in Greencastle when the company was in its heyday. Today there is not a single men's clothing store in town as the local workforce has shifted to blue collar in the aftermath of the IBM departure.

Even when IBM made its decision to close the Greencastle plant instead of a similar facility in Mechanicsburg, Pa., it did so with extreme class, paying its promised share of United Way funds for three years, donating the building and land to the city for future development and offering unprecedented retirement packages to employees, as well as enlisting Merrill Lynch to market and sell the 200 local homes that suddenly went on the market because of those transferred to other IBM facilities.

IBM never duplicated those efforts in closing later facilities around the world.

"Greencastle was such a small town," Andis explained, "they didn't want to leave an international black mark on it. They wanted to ride out of town on a white horse."

Roach recalled how the "big meeting" was called Nov. 11, 1986 to announce the fateful decision, and even employees on vacation were told they had to to come in to hear the shocking news.

"People started crying," he said. "Even some of the managers were crying."

"They weren't alone," Andis said, calling it "one of those days that are so crystal clear you remember who said what, and where you were standing when they said it."

Making that decision sting even more, was a notion the Greencastle plant was considered a much-better performing operation than the Mechanicsburg site, Andis noted.

"But because of the demographics," he added, "we were the plant they closed. We had more people able to retire, and it made more sense to close Greencastle."

Of course, that didn't make the decision any easier to swallow at the time as Greencastle lost 40 percent of its tax base and a huge chunk of the disposable income within the community with the plant closing.

But most of the former IBM workers have come to accept the 1986 closing decision over the course of time, Davies and other retirees said.

"Some are still bitter," Davies admitted, however.

Yet the end of the club isn't seen as "opening any old wounds at all," Andis believes. "In a sense, it's cathartic for people.

"You have to face reality," Andis conceded as other IRO members meandered out of the restaurant to face the day after convening their group for the final time. "Thank God for the opportunities we've had."