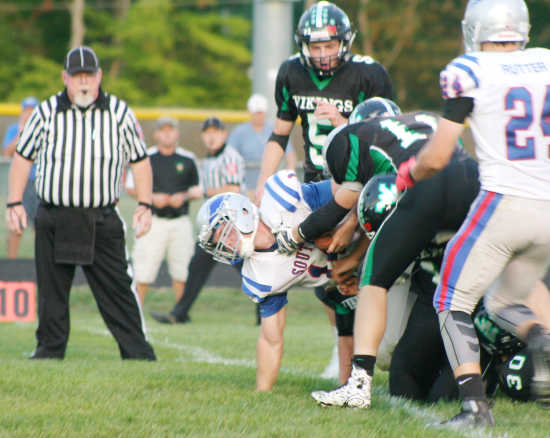 Still the workhorse for the Eagles, South Putnam junior Kyle Shaffer carried the ball for 41 yards and a touchdown. Shaffer started at defensive end to fill in for some injured Eagles. (Banner Graphic/NICK WILSON)
Order this photo

WEST TERRE HAUTE -- The South Putnam Eagles (5-1, 2-1 WIC) traveled to the Western Indiana Conference's western-most boundary Friday to take on the West Vigo Vikings (4-3, 1-2 WIC) in a gridiron matchup that would decide who holds second place in the division.

Defeating its host 22-16 on homecoming, South Putnam scored early and fast, leaving West Vigo to play catch-up throughout the fourth quarter. However, the Eagles survived the last-minute scare and brought the "W" back home to Putnam County.

Eagle head coach Nathan Aker spoke highly of the Vikings after the game, saying they fought hard right down to the wire.

"What a great game, my hat's off to (West Vigo's) coaching staff," Aker said. "What a fantastic atmosphere for a football game.

"We expected it to be a tight one," Aker continued. "These are two great football teams and West Vigo has done an outstanding job on their end. They have a lot of weapons and do a lot of things really well -- we knew it would be a battle."

Leading the way for the Eagles were two quarterbacks who split their time nearly down the middle. Senior Grady McHugh and freshman Allen Plunkett combined for 84 total passing yards and a touchdown on the night, helping to set up a defensive strategy for the Eagles by the fourth quarter. 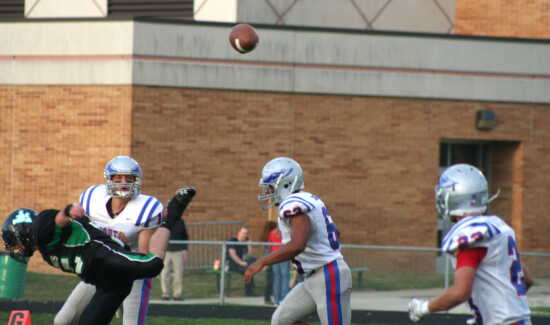 The Eagles drew first blood nearly 10 minutes into the game when McHugh connected with senior wide-out Jimmy Rutter for a 32-yard strike. The pass came after five consecutive rushes and capped-off a recovered fumble six plays before from the Vikings. Junior defensive tackle Josh Bills recovered the fumble.

After a blocked point after attempt by Viking senior Hunter Voils, the Eagles forced a quick three-and-out and scored again in the second quarter. With 7:40 left before the break, South Putnam's "Choo-Choo-Train" (5'11", 190 pound junior running back Kyle Shaffer) ran in a nine-yard score, followed by a successful two-point conversion when McHugh threw a dart to Rutter for the 14-0 lead to enter halftime.

Coach Aker acknowledged that West Vigo belongs to the "old WIC," saying that he knew the pressure was on.

"It's a big win for our program," Aker said. "We have a bunch of kids over there on the sidelines who all contributed to this -- whether it was on the scout squad or whatever, we got a fantastic effort from those young guys to get us ready. We had some adversity, some guys banged up a little bit, but some guys stepped up and played fantastic."

The Eagles' third-quarter score came as a bit of a surprise to fans. Viking senior running back Dakota Short was stripped by junior Eagle defensive back Dylan Wood on the Eagles' 15-yard line and subsequently ran back the 85-yard pick-six, putting his team up 22-0 to enter the final quarter. It would be the last score of the night for South Putnam, however, as the focus began to shift to defense.

West Vigo engineered some effective plays, especially in the second half. Voils managed to run for 100 yards on the night while freshman quarterback Jake Lautenschlager threw 15 completions for 139 yards, one touchdown and one interception.

However, one of the highlights of the evening was when the Eagles made an impressive goal line stand to refuse the Vikings a ground-entry following a 15-play rushing drive that went for 51 yards. The Vikings did not score from the ground the entire game.

With nine minutes left in regulation, the Vikings managed to put together two scoring drives, each resulting in eight points. However, it was too little too late.

Even a recovered onside kick and hail mary couldn't do the trick, as freshman defensive back Dalton Scott made the last-second interception to seal the deal for South Putnam.

Aker is taking the win in stride and is already preparing for next week's game.

"We play Sullivan (4-2, 2-1 WIC) next week," Aker said, acknowledging Sullivan's 59-6 victory over Greencastle Friday evening. "They're a great program and they're well-coached -- they've got a great thing going down there."

The game against Sullivan is scheduled to begin Friday at 7 p.m. at South Putnam High School.