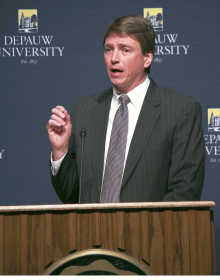 DePauw University "did, to a considerable degree, expose me to the ideas that later shaped my views about marriage and, ultimately, helped me to argue the case for marriage equality earlier this year," Douglas Hallward-Driemeier told an audience at his alma mater Monday night.

A 1989 graduate of DePauw, Hallward-Driemeier's arguments helped persuade the U.S. Supreme Court to rule in favor of same-sex marriage on June 26, four months to the day before he returned to campus to deliver a Timothy and Sharon Ubben Lecture.

"How does a straight, white, churchgoing male from the relatively conservative part of the Midwest come to argue one of the biggest civil rights cases of our generation?," Hallward-Driemeier asked.

In a speech titled "The Power of Ideas: The Journey from East College to the Supreme Court," he told the audience in Kresge Auditorium of his upbringing in St. Louis, and of how glimpses of discrimination witnessed early in his life and his experiences at DePauw and as a Rhodes Scholar at Oxford University have informed his career as a civil rights attorney who has presented more than 50 appellate arguments, including 16 cases before the U.S. Supreme Court.

Hallward-Driemeier, managing partner of Ropes & Gray's Washington, D.C. office, was brought into the landmark same-sex marriage case by an old friend from DePauw, Chris Stoll '91, senior staff attorney for the National Center for Lesbian Rights, who reached out to him on Nov. 7 of last year, a day after the 6th Circuit Court of Appeals reversed district court rulings that had struck down gay marriage bans in Michigan, Ohio, Kentucky and Tennessee.

"I remember I was driving home and stopped at a red light and read his email, which said, 'What are you doing for the next week?' They had decided that they wanted to go to the Supreme Court and they wanted to go immediately. And in order to have the court decide the case this past term we had to file a petition in one week's time. This is something that usually takes 90 days or more. But in one week we filed a petition asking the Supreme Court to take review of the case and to affirm the equal rights of same-sex couples to marry."

Looking out over the students, faculty, staff, alumni and others seated before him in Kresge Auditorium, Hallward-Driemeier outlined, "Our argument, in some ways, boiled down to this: that the plaintiffs' couples relationships ... their existing marriages were no less fundamental to them and to their lives than the marriages of opposite-sex couples like me and my wife, or even the justices and their spouses."

Hallward-Driemeier argued the same-sex marriage case before the high court in April.

"As I sat in the courtroom waiting for my time to argue in the Supreme Court there came a moment when I felt how physically tense I was," he recollected. "And I thought of the hundreds of thousands of people whose happiness rided on this case; I felt the burden of their hopes."

He added, "I sat there for a few minutes reflecting on this and concluded in the end that it was not their burdens that were holding me down, but their hopes that we lifting me up. That together we could achieve this great accomplishment."

On June 26 the Supreme Court ruled 5-4 that states cannot keep gay couples from marrying and must recognize their union.

"Being in the courtroom that day when Justice Kennedy announced his opinion from the bench was, apart from my own marriage and the birth of my children, the most emotional moment of my life. There was hardly a dry eye in the courtroom, there was just this sense of awe that we were there in this moment in history and that perhaps future generations would be spared all the pain of past generations."

Hallward-Driemeier added, "There's no question that being involved in this case is the highlight of my professional career," and described how lessons learned on the DePauw campus informed the successful arguments he made before the high court and how they've also shaped his life.

Robert E. Calvert, professor emeritus of political science, was Hallward-Driemeier's faculty adviser and introduced his former student at the event. Hallward-Driemeier, who was a political science major and Honor Scholar at DePauw, pointed to a seminar led by Dr. Calvert and the book they discussed, "Habits of the Heart: Individualism and Commitment in American Life," which was authored by a group of sociologists including Robert N. Bellah.

Hallward-Driemeier recalls the text concluding that "community and traditions are essential to our ability to lead a meaningful life. Tradition creates roles that we can inhabit and that give meaning to our interactions. The roles of husband and wife, for example, are defined by the myriad of responsibilities owed by each to the other. These roles are much more rich precisely because they've been handed down to us through generations than anything we could hope to create out of whole cloth ourselves during our own lifetimes."

The attorney said that the book made a strong point that tradition for its own sake is not enough. "We must discern what is good and essential in these traditions and adapt them to our new understandings ... The critical reappropriation of tradition meant that we didn't have to throw the baby out with the bath water; the challenge was to preserve what was good and meaningful in our cultural institutions and heritage without being beholden to their blind spots."

He added, "In many respects, constitutional argument, especially in the realm of civil rights, is that same project of critical reappropriation of tradition that we had discussed back in Dr. Calvert's class."

The Supreme Court advocate recalled another Honors Scholar seminar taught by Rod Clifford, in which he discussed his opposition to marriage "because he had never known a marriage founded on equality between the spouses. At least not, he added, any heterosexual marriage."

Clifford's challenge "stayed with me," the speaker noted. When the 1989 DePauw graduate married Mary Hallward, they decided to combine their last names.

"At that time, 20 years ago, it was relatively unprecedented for a man to hyphenate his name, and many acquaintances characterized that act as a radical step. But I responded that it was born of a very traditional impulse: the desire to share a family name, but informed by the need to honor the equality of both spouses within marriage. And when each of our children was born I took three months unpaid leave from work to make clear that raising our children was a shared responsibility."

Hallward-Driemeier earned a master's of philosophy in politics at Oxford University and a J.D. from Harvard Law School. He rejoined Ropes & Gray in 2010 after spending more than a decade handling civil appeals and Supreme Court litigation for the U.S. Department of Justice. Between 2004 and 2009, he was an assistant to the solicitor general, where he briefed and argued cases on behalf of the United States before the Supreme Court.