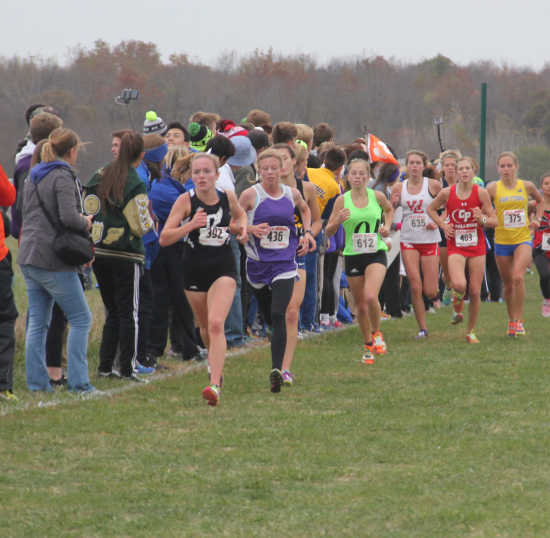 GHS freshman Emma Wilson (436) running in seventh place at the two-mile marker on Laverne Gibson course Saturday. Wilson was the only freshman to finish in the top-10. (Banner Graphic/JAY LOCKETT)

The Greencastle freshman led at one point during the beginning of the race but finished in eight place.

"It all went by really fast. I had a lot of fun," Wilson said. 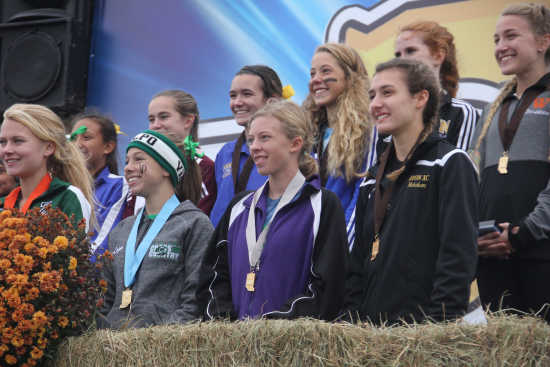 Greencastle's Emma Wilson (second from right) stands with the top-20 finishers at the IHSAA State Championship Saturday. Wilson finished in eighth place in her first State meet as a freshman. (Banner Graphic/JAY LOCKETT)

The Laverne Gibson course is a wide-open course that is curvy at parts with long straightaways in other parts. Wilson, who typically runs faster on hillier courses, said she didn't have to alter her running style at all.

"It's not like the hills are really steep," Wilson said. "They're slight inclines. It's a hard course."

Wilson was one of only two freshmen in the top-20 and the only freshman in the top-10. At the beginning of the race Wilson led for a short time before Carmel junior Sarah Leinheiser took control of the race. 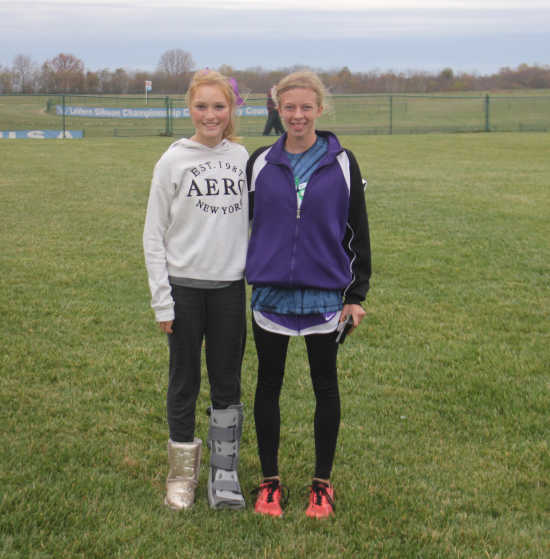 "I like to take off fast and get out there," Wilson said. "Then just try and keep a fast pace. Just to get out in front so I don't get boxed in or anything."

GHS coach Garry Anderson said that Wilson's starting position was not ideal for anyone let alone a runner in her first-year at the state meet.

"Emma's starting position, No. 44, was next to a spectator fence. If the fence bothered her, she didn't act like it. She and the eventual state champ from Carmel battled it out for nearly two miles until the Carmel (runner) took the lead and held on to win the championship." Anderson said.

Four of the top-five finishers were seniors, which will leave only three runners who finished ahead of Wilson for next year's competition. Wilson, who finished one spot ahead of her sectional rival, junior Taylor Nicholson of Avon, said she has learned a lot from this season.

"Just try to pace myself and give it everything I have," she said.

"I thought Emma had a very nice race and jockeyed back and forth with others to finally finish in the eighth position. She was very pleased to finish that high. I was really excited for her to be able to do so well being her first time in the State Finals with three more years to go."

So many records fell under Wilson's first-year reign that she will be competing only with her own times next season.

"She raced hard all season and finished first in most of the invitationals and meets during the season," Anderson. "She broke five course records, the conference course record, individual record and the Greencastle school record. Her time of 17:43 that she had earlier at Ben Davis may be a new state record for freshmen. I will have to check that one out."