Putnam County 4-H families joined together Sunday afternoon to recognize volunteers and acknowledge the achievement and accomplishments of 4-H members.

The highest award in the local 4-H program is the Spirit of 4-H Award, which is sponsored by Bittles and Hurt and Hopkins-Rector funeral homes. The 2015 winner is Allacyn Arnold, who was presented with a framed certificate and a cash award by Scott Herrick representing the sponsors. 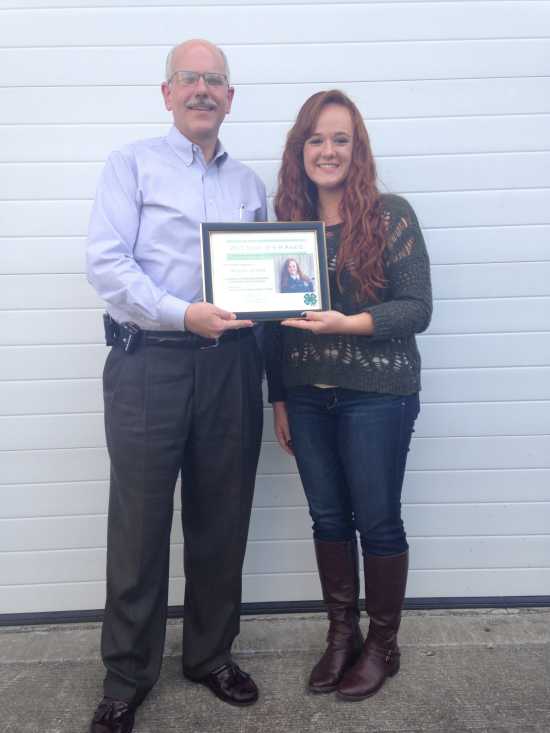 Allacyn Arnold accepts the Spirit of 4-H Award for 2015, the highest award offered by the Putnam County 4-H program, from Scott Herrick, representing Hopkins-Rector and Bittles and Hurt funeral homes which sponsor the award.

"We are proud to annually sponsor this top 4-H award honoring an outstanding Putnam 4-H career," Herrick said. "The Spirit of 4-H award has been awarded since 1991."

Typically there is one winner of the prestigious award. However there has been twice in the history of the award that no award was given and there have been two occurrences of awarding two awards in the same year.

Arnold, the daughter of Andy and Nancy Arnold, is a 2015 South Putnam High School graduate. She currently is a freshman studying at Purdue University, studying pharmaceutical sciences with career interest in pharmaceutical development. She plans to work this coming summer as a summer assistant in the local Purdue Extension office.

Asked who was the most significant influence on her accomplishments, Arnold cited, "The greatest influence in my 4-H career and biggest motivator has been Penny Long, my 4-H club leader who first introduced me to cake decorating and inspired me to become involved.

"I would like to thank my family and also Jason Keeney who as poultry superintendent helped me to learn time management and responsibility through the poultry project," Arnold said.

In terms of her experience with the overall 4-H program, the Spirit of 4-H Award winner said, "My greatest positive moment was feeling I had impact by modeling the people who influenced me as a third-grader when I became an upperclassman to pay back."

Putnam County's 4-H Youth Educator Mark Evans noted, "Allacyn will certainly be missed as she helped significantly with 4-H camp and engaged in numerous Junior Leader activities. Arnold served as Junior Leader co-president and provided great leadership taking the position serious as it is charged with Fair Board representation as well."

Other awards during the afternoon program included recognizing the 2015 First Year 4-H award winners, who were Brian Ladd who completed 20 projects, while Leslie Brown was second in most completed projects with 12.

The top first-year Junior Leader was Gayle Baugh while the top overall Junior Leader with completion points was Michayla Sanders and Philisha Sanders. The awards are based annually on the "My Record of Achievement forms submitted by the 4-H'ers. Extension staff and 4-H Council members review forms to assign points which ultimately determine the award winners.