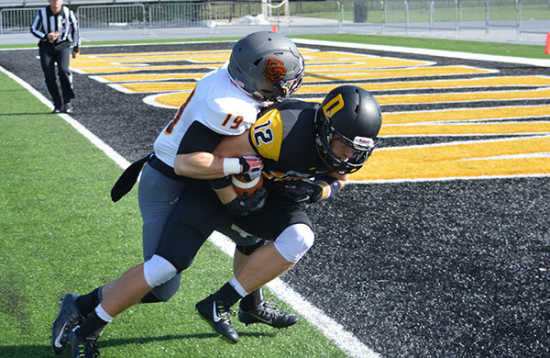 DePauw's Ian Good crosses the goal line with a Yeoman on his back. (DPU Photo)

DePauw's offense totaled 598 yards, while the defense posted its third shutout of the season as the Tigers improved to 8-1 overall and 7-1 in the North Coast Athletic Conference following a 53-0 win over visiting Oberlin. The Yeomen dropped to 3-6 overall and 3-5 in conference play.

The Tigers' offense failed to collect a first down on its first series, but it scored on the next four possessions starting with Ian Good's 28-yard reception from Matt Hunt with 7:55 left in the first. Ramon Lopez made it 12-0 on a 1-yard run with 4:18 remaining in the opening quarter and Tyler Leising scored on a 59-yard pass play from Hunt with 46 seconds remaining in the stanza to push the margin to 19-0.

Jason Kirchhoff scored on runs of 4,1 and 28 yards in the third quarter to make it 46-0 before Jake Lasky scored on an 18-yard run with 10:49 left in the fourth to wrap up the scoring.

DePauw totaled 598 yards of offense, while the defense limited Oberlin to just 202 yards. The Tigers rushed for 308 and totaled 290 through the air for the fifth game this season of at least 200 yards both on the ground and in the air.

Philip Ganser paced the DePauw defense with six tackles including 1.5 for loss, while Thomas Gray followed with five stops. Nate Orrison led with 2.0 tackles for loss including the team's lone sack. Rocky Leffler paced the squad with two pass breakups.

Justin Bute led Oberlin with 11 tackles followed by Brendan Mapes with 10. Mapes led with 1.0 tackles for loss, while Spencer Conley and Drew Nolan shared the only sack.

DePauw wraps up the regular season next Saturday, when it hosts Wabash in the annual Monon Bell game. The schools will meet for the 122nd time with kickoff on Nick Mourouzis Field at Blackstock Stadium set for 1:07 p.m. The game will be carried live, nationally, by AXS TV and the winner will earn the North Coast Athletic Conference's automatic qualification into the NCAA Division III postsesaon.