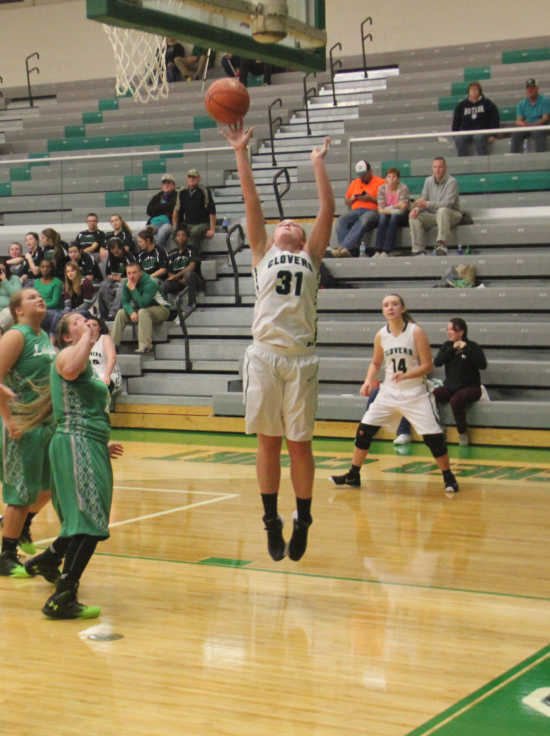 CLOVERDALE - An up-and-down matchup for the Cloverdale girls' basketball team against North Central ended in a 52-44 loss for the Lady Clovers, who were playing with the full team for the first time this season.

The Clovers were hitting shots from the post but couldn't overcome the late surge by the Ladybirds, who pulled away with the game nearing its conclusion.

"This was the first game when we had everybody there and we've been able to practice for a couple days," CHS coach Matt Langdon said. "We came out and did some different things that we've never looked for in years past."

CHS jumped to an early 9-1 lead but the Ladybirds fought back to take the lead 15-14 after the first quarter.

Haley Hamm nailed a three in the first and Lauren Meek hit a long distance two-pointer, both coming off assists from Payton Dorsett but the Clovers were making a point of attacking the basket and getting shots from the post.

"We fed the post probably the best I've seen since we've been here," Langdon said. "We are really looking for those lob passes and trying to feed these girls that are working hard down there posting up."

The Clovers' work in the post began to pay off as CHS started to earn some fouls. Cloverdale was struggling on the boards early until freshman Tori Combs entered the game in the second quarter. She was only eligible for three quarters and she pulled down four rebounds in the second quarter alone.

Combs also helped with the inside game as she became Dorsett's favorite target down low.

"We've always been with good defense but we live on the perimeter," Langdon said. "If we can add that to our basketball team, some inside play, that's going to open up a lot of threes."

Defense for both teams picked up as the game moved toward halftime and North Central was leading 26-21 at the half. Kelsey Helterbrand had four steals, three in the first half.

"Our man to man looked good tonight," Langdon said. "Our zone was still a little slow on rotations. We're still figuring that out. It was a good first game for us. That's what it felt like. JV came out had a really good win. We have a lot of girls going both ways and that's exciting to see them step into varsity roles and play big roles. They're not getting scrap time they are stepping in and getting big minutes."

In the second half the game spread really began to pick up as did the physical play. Hamm and Mariah Huge began to establish themselves on the boards earning five and four rebounds respectively in the second half.

Combs continued her good game, scoring seven of her team-high 18 points in the third. Combs was able to bail out the Cloverdale offense several times, tracking down tough passes and scoring even with the Ladybird defense concentrating efforts on defending the post.

After one of Combs' three blocks she took the ensuing layup to give CHS a 31-29 lead with two minutes in the third.

"We have an abundance of three point shooters," Langdon said. "What's been hard for them in the past is they've been under a lot of pressure. Girls were coming at them because we've not gotten it inside. So if we can continue the ball movement and get the ball working inside out. I think it's going to be a great year for our three-point shooters."

Unfortunately for CHS the inside game began to stall besides Combs' seven fourth-quarter points, CHS only managed one other field goal in the final quarter. This made it difficult for Dorsett to find any room to get the offense going and led to North Central's fourth-quarter run that sealed the game.

Cloverdale's next game will be at home on Saturday against Shakamak.