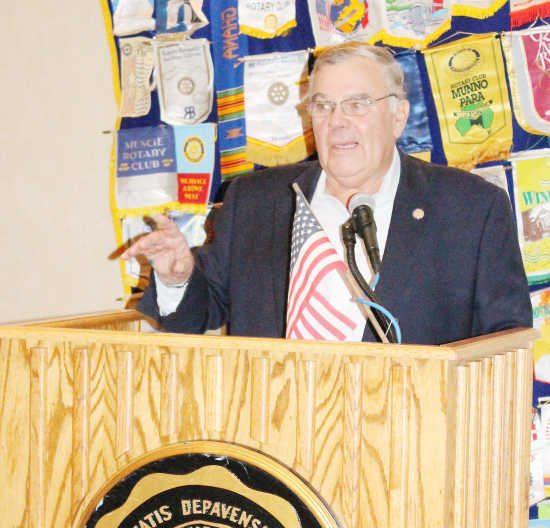 State Rep. Jim Baird shares personal reflections on Veterans Day during the Wednesday meeting of the Rotary Club of Greencastle. The Vietnam veteran shared a general history of the holiday before reflecting on his own experiences. (Banner Graphic/Jared Jernagan)
Order this photo

As the District 44 state representative, Jim Baird has been an advocate for veterans in the halls of the Statehouse.

On Wednesday, though, things were more personal, as Baird shared his own reflections in a Veterans Day speech to the Rotary Club of Greencastle.

A Vietnam veteran, Baird (R-Greencastle) started out generally, giving a history of Nov. 11, from the World War I armistice on Nov. 11, 1918, through early observations of Armistice Day to Veterans Day as it is now celebrated.

Baird then made the discussion more personal.

"Not for my sake, but I thought it might give you a little insight on veterans and how they end up in the service," Baird said.

In this case, the Parke County native was at Purdue University. Having already earned his bachelor's degree from Purdue, Baird was married with one child and working on his master's degree when the letter came that he was needed to serve his country.

Although it was not the path he had originally chosen, Baird took joining the Army very seriously, and still does.

"I took an oath to protect this country," Baird said. "I love this country and want it to be the kind of place we can raise our children."

After training, Baird ended up in Vietnam, close enough to the border that they could see the North Vietnamese flag.

A first lieutenant in charge of overseeing convoys in the Khe Sanh area, Baird said his company was "in combat 24-7."

Apparently Baird and his company were good at what they did, too. He found out later that the North Vietnamese had put a bounty on him and another lieutenant.

The exploits of their unit, the 523rd Transportation Company, apparently spread beyond Vietnam because in 2012, they became the first company inducted into the U.S. Army Transportation Corps Hall of Fame.

"There was a lot of pride shining through that day," Baird said.

Baird also only hinted at the sacrifices he and his family had made as a result of his service.

Near the end of his talk, Baird expressed his opinion on enlisted soldiers versus drafted soldiers.

"When the lead starts flying, you don't really care whether he or she enlisted or was drafted, as long as they're doing their job," Baird said.

He closed with a declaration of his feelings on the United States and the men and women who have served.