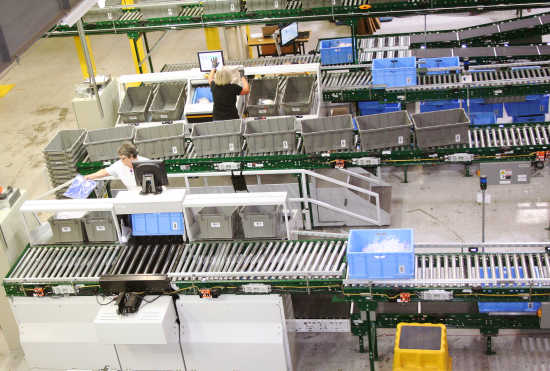 In listening to dialogue about another possible expansion for Ascena Retail Group's Greencastle facility, the City Council not only got a refresher course in tax abatement but a walk down memory lane at its November meeting.

While no action was taken on a request for tax abatement on Ascena's potential $44.5 million project, Greencastle/Putnam County Development Center Director and Mayor-elect Bill Dory explained the process again for the Council, a sparse City Hall audience and anyone watching at home on the cable access channel.

Saying a "property tax phase-in is a little closer to the truth," Dory noted the sliding scale on which Ascena would pay zero percent of taxes in year one on new real property and new equipment and 100 percent of new taxes in year 11 and beyond.

"The city loses no property tax," Dory stressed, deflecting campaign and post-election rhetoric. "If abatement is not granted, there won't be any additional taxes."

The Greencastle Ascena Retail facility is reportedly in competition with West Coast sites for the expansion effort, which would accommodate a growth in its e-commerce efforts coinciding with Ascena's recent acquisition of the Ann Taylor and Loft brands.

"We're competing with some other communities," Dory said, for what is expected to be a two-phase expansion of both the building and the workforce by Ascena.

The possible new investment would mean 30 additional fulltime jobs at Ascena, which is fresh from expanding its Greencastle facility into an 800,000-square-foot e-commerce fulfillment center that employs 350.

"As you know," Dory told the Council, "they've just ramped up (their operations) for e-commercce."

Ascena, which is considered a leading specialty retailer of apparel for women and tween girls, purchased the former F. B. Distro facility on Greencastle's East Side from Charming Shoppes in 2012 to create its Greencastle Fulfillment Center to serve five of Ascena's brands -- Dressbarn, Maurices, Justice, Lane Bryant and Catherines.

Ascena is still in the midst of hiring the full complement of 242 employees linked to the previous expansion with another 30 workers due should the local site be selected for the latest project. It is estimated the new jobs would pay $16 an hour with full benefits.

"In addition to those 30 jobs, there be some more part-time jobs," Marti Brenner, tax senior manager for GBQ Partners said on behalf of Ascena during the Council session. "Ascena really appreciates the partnership with the community."

"We see great things happening in Greencastle now and down the road," Sullivan told the Banner Graphic.

"Over the last few years," Sullivan continued, "our work across all levels of the organization has created a best-in-class fulfillment center in Greencastle with performance exceeding expectations. The Greencastle facility is positioned well for additional investment to expand operations for the growing demand of our brands. But it's not a done deal; we still need to fine-tune a few things before any final decisions are made."

Dory also noted that under proposed terms of the abatement, Ascena would still pay $628,000 in real estate taxes over the 10-year period with a tax savings of $615,000. It would pay $1.4 million in personal property taxes with a projected tax savings of $2 million.

At the same time, the additional jobs are forecast to generate $174,000 in new income taxes over the 10 years.

Taking no action on the issue at its regular meeting, the Council has set a special session on the matter for 5 p.m. Tuesday, Nov. 24 at City Hall.

The Greencastle Redevelopment Commission previously passed Resolution 2015-8 reaffirming the Ascena site on the north side of Indianapolis Road as an economic revitalization area for the company.