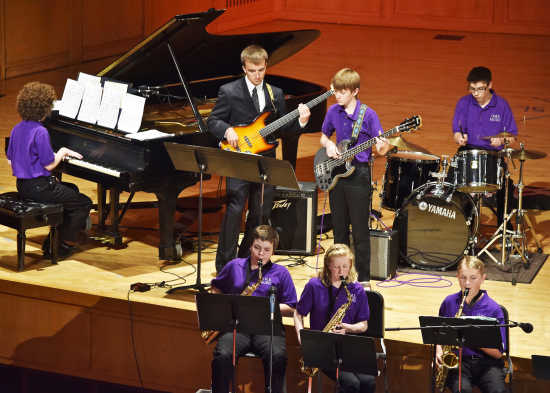 The Greencastle Middle School Jazz Band will join the DePauw Jazz Ensemble for a concert in Kresge Auditorium at 7:30 p.m. Wednesday, Nov. 18 in DePauw University's Green Center for the Performing Arts. (Courtesy photo)

For its next concert, on Wednesday, Nov. 18, the DePauw University Jazz Ensemble returns to the Kresge Auditorium stage with a special guest, the Greencastle Middle School Jazz Band.

The concert will be presented at 7:30 p.m. in DePauw's Green Center for the Performing Arts.

The GMS Jazz Band will open the set with two numbers, "The Pink Panther" by Henri Mancini and "Polar Vortex" by Victor Lopez. Those will be followed by the DePauw ensemble, directed by Steven Snyder, featuring the music of Count Basie, Matt Harris, George Stone, Rob McConnell and Bob Mintzer.

"We always try to get a nice variety of things on the program," Snyder noted.

In addition to featuring the GMS band, highlights of the evening include two of his favorite pieces by Count Basie, "Lil Darlin'" and the "Blues in Hoss' Flat.'"

"I really like 'Lil Darlin,' " notes junior jazz pianist Drew Casey. "It's a sparse piece, so it gives me a lot of time to think about tasteful notes I want to play. It's got some nice arpeggiations in the guitar, and the orchestration is really exquisite."

"We will also have a funk piece by a composer named Matt Harris, called 'Whatsa Matta,' that has a kind of 'Tower of Power' appeal to it," Snyder added. "We enjoy that one a lot, and there's a ballad by a wonderful L.A. composer in the swing style arranged by George Stone. He's done a number of things in the entertainment industry, including a couple of his own big band recordings that are just fantastic, although not that well known. So it's great to be able to dig into the repertoire and find those gems that are less known but still beautiful pieces."

The fast-paced "Just Friends," arranged for big band by Rob McConnell, features some difficult trombone work. "The players have been working hard to make that sound great," the director added.

The final piece, "March Majestic" by Bob Mintzer, is based on a New Orleans street beat with the entire rhythm section involved in creating the beat feeling, which is a tribute to New Orleans' contributions to the genre.

General admission tickets to Wednesday's jazz concert are $3. Admission for seniors, children and all students is free.