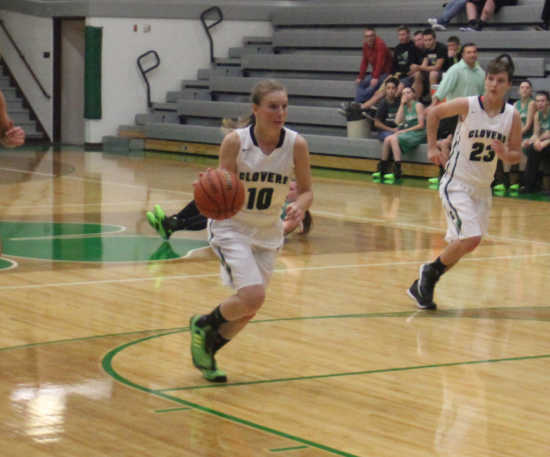 Kelsey Helterbrand moves the ball up the court for Cloverdale. She had 12 points in the big win Tuesday. (Banner Graphic/JAY LOCKETT)

DUGGER -- The Cloverdale girls' basketball team earned its second win of the season Tuesday against Dugger Union, which was called upon to replace the South Vermillion team which was unable to play the scheduled date.

The change did not phase the Lady Clovers, who took the 62-19 victory with ease.

"We did a good job tonight getting in passing lanes, which created some easy looks on the offensive end. The half court defense continues to improve each game," CHS coach Matt Langdon said.

The first quarter was led offensively by Lauren Meek, who knocked down three buckets, one with the foul, to score seven of her game-high 12 points in the period.

Kelsey Helterbrand contributed throughout the game also putting up 12 points while Tori Combs scored six of her 11 in the second.

"We still need to move the ball a little quicker on the half court offense. But overall it was a great team effort and win. Hoping this is a nice confidence boost going into a tough Edgewood team Friday night."