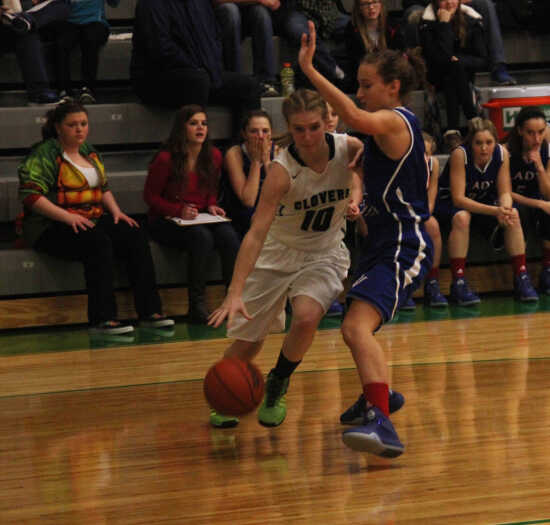 CLOVERDALE -- The Cloverdale girls' basketball team had a tough time getting a lot of offensive output and rebounds were tough to come by for the Clovers (5-12), both of which played a part in the 48-28 loss Friday against Owen Valley.

"It was one of those games where we just struggled with everything," CHS coach Matt Langdon said. "I told the girls we've been playing some good basketball whether it's a win or a loss lately. As a team we weren't pleased with our performance tonight."

Angela Pieper hit two foul shots in the first for Cloverdale's only first-quarter points. Haley Hamm came to life in the second half making a three and hitting two more from the field. Kaylyn Couch made a basket giving CHS nine in second.

Skyla Renner then made the only bucket from the floor in the third with Pieper and Kelsey Helterbrand knocking down a foul shot each.

"There were still spurts and some good things," Langdon said. "A couple of freshman came in and played inside and got their first points of their career. We had Huge out this game so there were some bright spots but I told the girls a lot is going to depend on these next few practices and this game. How can we respond to a performance that we weren't pleased with?"

The fourth quarter was the best offensively for Cloverdale who played the Patriots tough up until the final buzzer. Meek scored all of her three points in the quarter, as did Abby Walker who went 3-5 from the foul line. Payton Dorsett and Tori Combs both earned a bucket as well.

"We'll try to move forward," Langdon said. "It's not a bad thing if it's the exception. It's that one bad game. It happens. We just don't want to have that carry over effect. We want to be hungry and get back out there. Tuesday couldn't come soon enough."