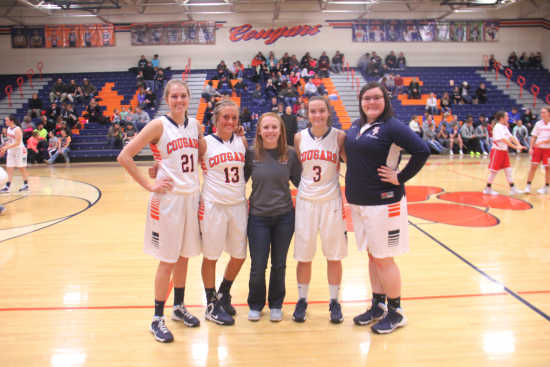 ROACHDALE -- A hot start fizzled out for the North Putnam girls' basketball team, which led 15-2 before losing 54-51 to Southmont Tuesday.

Taylor Nauert picked up a double-double during the loss, but it wasn't enough to stop the Mountie comeback.

Solid defense combined with some good transitions led to a big lead for the Cougars early in the first quarter.

The Cougars fought to get good looks in the paint with Emilee Henninger and when they didn't it was Aleah Duncan who knocked down two from long range to help put North Putnam up 15-2.

Mia Runnells also played a big part as she was able to twice pick up transition buckets off steals during the physical game.

However Southmont fought back in the first and went into the second down just 17-14. North Putnam maintained its lead throughout the second thanks in large part to Nauert, who picked up eight of the 14 Cougar points.

However both she and Duncan found themselves in foul trouble and Southmont took advantage, winning the second quarter 15-14.

"It's tough," NPHS coach Kevin Corsaro said. "But other people have to step up. It's like I tell the girls a lot. Mostly for us it is the fouls. We tend to foul a lot and they are the fouls you can see. They are on the shots. When we are getting hammered while dribbling those are harder to see. When you shoot the ball and try to block a shot it's easier for officials to see."

The physical play did not slow down as the game wore on even though the Cougars didn't shoot any foul shots in the third. Nauert continued her role as the main breadwinner, earning six in the third.

The Cougar defense also stayed strong, limiting Southmont to 10 while NPHS scored 13 with two baskets coming from Lyndi Parent and Bronwyn Spencer and a three from Runnels.

However into the fourth it got harder for NPHS to move the ball as the Mounties moved to a full-court zone while also pressuring the inbound pass.

Southmont continued to inch closer and closer, taking the lead at 48-47. North Putnam managed to reacquire the lead, but once Nauert fouled out with just over a minute left in the fourth Southmont was in good position and took the lead for good 52-51 with 52 seconds left.

The Cougars had a few looks at the rim but just couldn't get a shot to fall and the Mounties walked away with the win.

"We've been in a lot of close games here lately," Corsaro said. "It's been one bounce here or one bounce there. Sooner or later those bounces need to start going our way. Hopefully these close games will pay off for us two weeks from now when it matters."