Rep. Baird instrumental in 'Chair of Honor' placement at Statehouse

INDIANAPOLIS -- The Indiana Statehouse is now home to a POW-MIA Chair of Honor, according to District 44 State Rep. Jim Baird (R-Greencastle) who was instrumental in its placement.

"This chair sits empty to honor American prisoners of war and those who are missing in action," Rep. Baird, himself a Vietnam War veteran, said. "As a veteran, I want to recognize members of the Rolling Thunder for providing the POW-MIA Chair of Honor and meeting with the General Assembly to discuss how we can better serve members of our military." 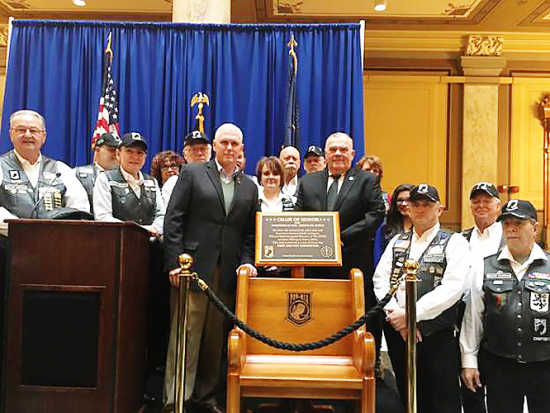 The Chair of Honor sits on the third floor of the Statehouse where it will be "perpetually empty to help people remember that even though our soldiers are not here, there is still space for them."

Baird also led the House of Representatives in recognizing the Chair of Honor with a resolution.

He told the Legislative Update audience in Greencastle recently that he was "very honored and privileged " to be involved in the project. He also noted that Rolling Thunder took great pride in the project, even taking measures to match the wood in the chair to that used throughout the statehouse.

Hoosier veterans and members of the military visited the statehouse last week where they were recognized by the Indiana General Assembly for their bravery and commitment to our nation, Baird said.

"As members of the House of Representatives, we work to support education, employment and other policies that have a positive impact on our veterans and their families," Baird said. "It is also vital that we honor those who have made the ultimate sacrifice for our freedom while remembering the prisoners of war and service members who are missing in action."

Rolling Thunder is a non-profit organization dedicated to caring about veterans, including POW-MIA issues. The group works to provide Chairs of Honor throughout the country as a reminder that, "even though our soldiers are not here, they will never be forgotten."

Rep. Baird represents all of Putnam County and portions of Clay, Morgan, Owen and Parke counties.