South Putnam falls in sectional round 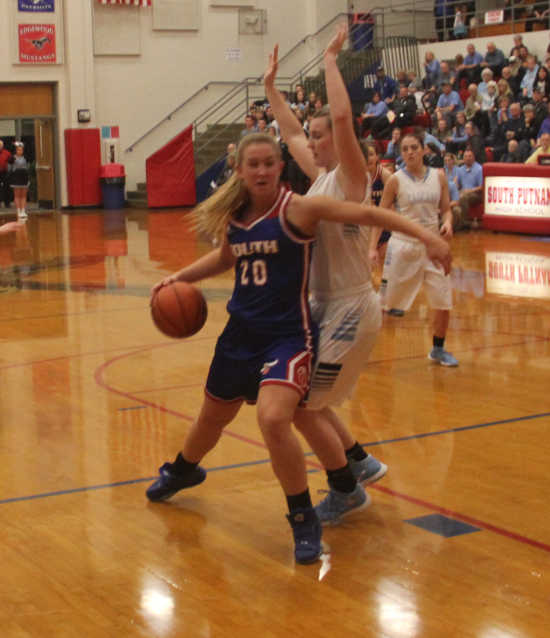 SPHS' Katie Hewitt backs down a Cadet defender and picks up two points in the sectional Tuesday. (Banner Graphic/JAY LOCKETT)

Despite a brilliant second-half defensive effort and 25 points from Miranda Bieghler, South Putnam fell to Cascade Tuesday in the South Putnam sectional and the Eagles' season ended with a record of 11-12.

South Putnam started out with some difficulties getting the ball into scoring position. The Cascade press worked well and forced the Eagles into turnover after turnover and SPHS was down 22-6 after the first quarter.

But as they have done all season, the Eagles refused to lay down and as a result the game got physical fast. The Eagles were able to outscore the Cadets in the second quarter 15-8 and had trimmed the lead to just nine going into the half 30-21. 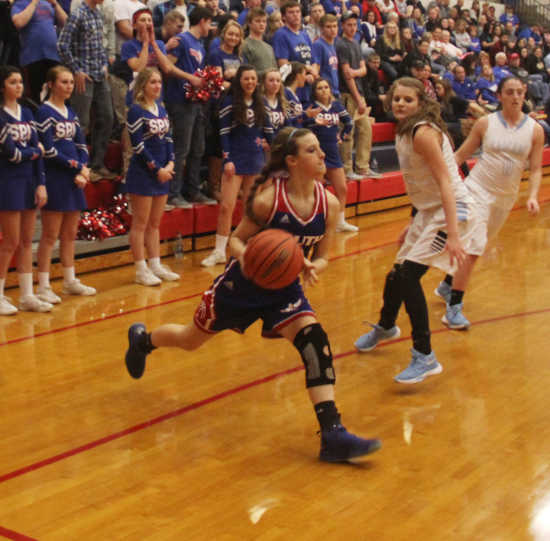 However it was tough for the Eagles to keep Cascade at bay due to the long-range shooting displayed by the cadets.

At one point in the fourth the Eagles managed to get within seven points with 50 seconds left in the fourth thanks to quick fouling and good free throw shooting by Miranda Bieghler who made 11 of 12 foul shots and two threes in the fourth, but they weren't able to get over the hump.

The Eagles will be losing two seniors who, according to Eagle coach Briand Gardner, were instrumental everything the team did this season.

"Katie (Hewitt) I'll start with her," Gardner said. "She's been a big leader, she and Jess Modglin both. Going through four years with four different head coaches, it would be easy for them to start this year off like 'Oh my gosh, here it goes again.' But they bought in and they got everyone else to buy in.

"Jess is a great vocal leader for us," Gardner continued. "She put girls in the right position and did a lot of things. She just kept being a vocal leader all year. Katie Hewitt is a girl we're going to miss just like Modglin. She (Hewitt) played a different role of being inside. As the year has gone on she became a real force and people didn't know how to play her."

Gardner said that the seniors helped the Eagles to not only do the right things all the time, but also helped the team to improve every day for the next matchup.

"For us it's the little things that we continue to get better at and fight through," Gardner said. "We talk about doing the right thing every time. These girls do that. That's what you want as a coach. That's I've done it for the last 20 years. You want kids that come out everyday and try to do everything you ask of them."

With Gardner set to return next season the Eagle program will be in good position considering three of the team's current starters are sophomores. The Eagles will also have the benefit of height with Maddie McHugh, Savannah McIntosh and Jessica Vensko who will return as the only senior next season.

"South Putnam's had a good program but we are starting this new era," Gardner said. "(Hewitt and Modglin) are a big part of what we did but for us it's all the little things that we can do in the summer to get better at your individual game. If you can do that in the summer, then when you get back together in the winter then team will work better because everyone's better at every little aspect of the game."

Gardner said he is looking forward to the summer even though it means he is done coaching for now because that's when the work gets done. He was also most appreciative of the Eagle faithful who cheered for SPHS in every win and defeat.

"I couldn't be happier about our fans," Gardner said. "We had great support and a big student section. They've been wonderful all year long for us. It's part of the reason I love coaching the girls, because of the parents and the support we get."