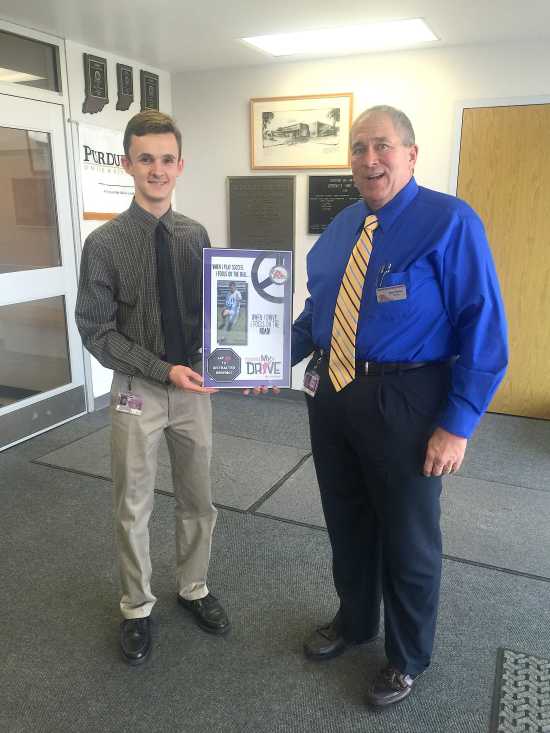 Greencastle High School senior Zach Wilkerson (left) and GHS Principal Russ Hesler pose for a quick shot as Wilkerson presents a framed poster of appreciation for all the support he received during his Celebrate My Drive efforts. (banner Graphic/NICK WILSON)
Order this photo

In association with State Farm Insurance, Greencastle High School senior Zach Wilkerson has taken it upon himself to keep his friends focused while behind the wheel.

With the "Celebrate My Drive" initiative, Wilkerson and his friends have been spreading posters around town in an effort to reduce distractions while driving.

Brad Tucker, an insurance agent with State Farm in Greencastle, said the program has been in place for three years but has never had quite the attention of such a dedicated young person.

"What a neat thing they did this year," Tucker said, referring to Wilkerson and others at GHS. "Zach put together all the posters and T-shirts to promote safe driving."

The posters, GHS Principal Russ Hesler said, were part of an effort to "put a face to the tragedy."

"The thing is, those (featured) are real people walking the hallways of our high school," Hesler said. "They're not only involved in extra-curricular activities, but they're also helping promote and advertise the Celebrate My Drive and Stay Alive programs."

Wilkerson, who is also an athlete at GHS, said the fellowship he has experienced through this process has been "truly amazing."

"That's something that I've found is so great about this community effort," Wilkerson said. "Mr. Hesler kind of got Greencastle involved and Mr. Tucker helped bring everyone together. These are all current seniors at the high school that agreed to be the subjects and be featured in these posters.

"Mr. Hesler helped me hang up the posters in the school, but then I wanted to take it a step further and get them out in the community," Wilkerson continued. "Everyone was incredibly receptive about having the privilege to be able to feature these posters."

The efforts of Wilkerson and others stem from a contest between regional schools through State Farm Insurance. In fact, Celebrate My Drive is one of five initiatives that take place throughout the year: Steer Clear, Road Trips, Road Awareness and Driver Feedback (which utilizes an electronic device to provide statistics based on one's driving) also support safe driving for not only students, but for adults as well.

Wilkerson expounded on Hesler's comments, adding that other students were heavily involved as well.

"This year, being my second year of involvement, I had the opportunity to work with a couple of fellow students -- Lilly Spencer and Ruth Heithause -- who both expressed interest in it and actually helped create a public service announcement video to go along with the school stuff," Wilkerson added. "We were able to collaborate on the video and the posters together."

Celebrate My Drive posters can be seen throughout Greencastle.

For more information on how to support this program, or if interested in acquiring a poster to hang, call Greencastle High School at 653-9711 or visit http://www.greencastle.k12.in.us.