Second round of rate increases implemented in Fillmore

FILLMORE -- The second phase of a utility rate increase passed in late 2014 will show up on the bills of Fillmore utility customers this month.

The town announced this week it would be implementing the next phase of the two-year increase with the next round of bills, due to mail late this week.

See the inset box for a complete look at the rate increases. 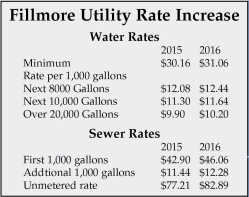 The two-year plan of rate increases was passed in a pair of ordinances in December 2014 as a way for the town to deal with increases from its water and wastewater service provider, Greencastle Municipal Utilities.

The increases should have gone into effect at the beginning of 2016, with the bills mailed out at the end of December. The increases are coming two months late as Clerk-Treasurer Tom Gilson continues to learn on the job.

No one had told Gilson the increase should have been implemented two months ago.