Cloverdale is 16-7 on season

EMINENCE--The Cloverdale boys' basketball team finished out its regular season Friday night, with a convincing win on the road against Eminence, but its wasn't all fun and games for the Clovers, who found themselves fighting from behind before winning 73-45.

It was a low-scoring first half for both teams. Cooper Neese and Jalen Moore netted five points together but Brenan Hall picked up six to keep the Clovers in the mix, despite bring down 12-11 after one.

"I thought Brenan Hall played his best game all around," Clover coach Patrick Rady said. "He rebounded well, finished at the basket. He came off bench and really changed the tone of the game. I'm happy for him being a senior. He was really was aggressive in the paint area and we need that." 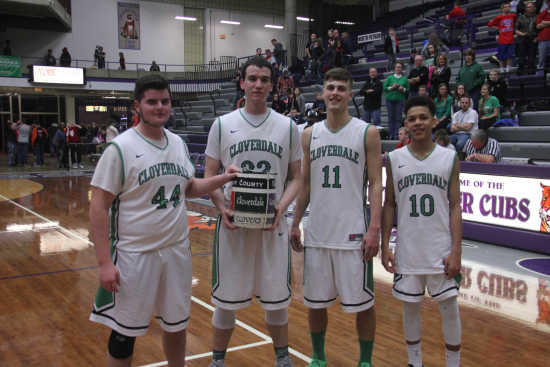 The second quarter saw Jake Wilkes put up his six points to help CHS gain a lead. Neese also nailed two threes and while the offense got rolling, Rady was able to get his defense working as well.

"We were up 11 after the half and then we were able to speed them up," Rady said "We got them into traps and got them to make mistakes and take quicker shots. Eminence was patient with the ball in the first half and we were able to get more possessions (in the second half). That's what we want to get more possessions. In the third and fourth we got back to playing how I know we can,"

After a 28-17 halftime lead, the Cloverswent on an 8-0 run and held the Eels to nine points while scoring 34 themselves. Rady said his team began playing 84-feet worth of defense to pressure Eminence into tough situations.

While Eminence may have had its best quarter in the fourth, the game was far out of reach and CHS walked away with the win.

"Still have work to be done in our half court defense before sectional," Rady said. "It'll be good to get a good week of practice in. We just want to fine-tune some things on the defensive end."

The IHSAA tournament draw will be Sunday at three with the sectional round beginning in March.

Cloverdale finishes its regular season winning seven of its last eight games and earing a 16-7 record.