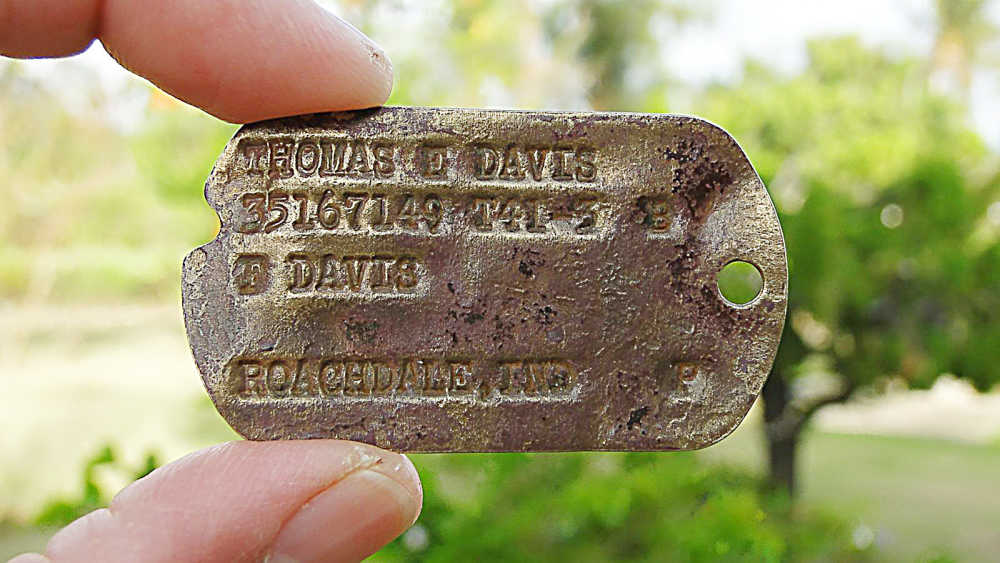 World War II Pfc. Thomas E. Davis' Army dog tag was found in a farm field in Saipan (below) in early 2014. Davis earned one of the nation's highest military honors after surviving the bloody fighting on Saipan only to die during the even bloodier battle for Okinawa nearly a year later. (Genevieve Cabrera via AP)

Dorothy Hollingsworth was just seven when her brother Tom left the family farm in Roachdale to join the Army a few months before the United States entered World War II. She never saw him again.

Now, more than 70 years after Pfc. Thomas E. Davis was killed in one of the war's final, major battles, a tangible reminder of her beloved sibling has been found on the Pacific island of Saipan -- one of his Army dog tags.

Davis was born and raised on his family's farm in Roachdale. His mother died when he was a young boy, and his father remarried. Davis had six siblings: an older brother, Harold, three half-brothers and two half-sisters, including Hollingsworth.

The brothers have died. His other half-sister, Hazel Priest, 81, lives in Victoria, Texas, and several nieces and nephews live in Texas, Ohio and Indiana.

"He was a great guy," said Hollingsworth, 82, who lives outside Dayton, Ohio, noting that some of her earliest memories are of the tall, thin sibling 17 years her senior who always sat next to her at the dinner table. "He was always laughing and singing and whistling."

Cultural historian Genevieve Cabrera told The Associated Press in an email that she found the discolored metal tag sticking out of the soil of a farm field on Saipan in early 2014. It was embossed with Davis' name, serial number, hometown and other information.

Cabrera recently gave the tag to members of Kuentai, a Japan-based organization that has found the remains of five 27th Division soldiers on Saipan. The group notified the AP this month about the dog tag's discovery in the hope that his relatives could be found. 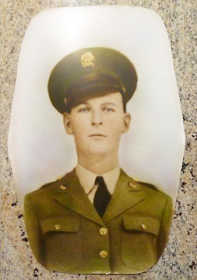 The AP tracked down members of the soldier's family with the help of Anthony Barger, the archivist for the Putnam County Public Library.

Kuentai representatives said they'll arrange to meet the Davis family in the U.S. to hand over the tag.

While it is relatively common to find canteens, weapons and even unexploded shells from the 100,000 Americans and Japanese who fought for 25 days on the 46-square-mile island, dog tags remain a rare find, Cabrera said. The tags, attached to a chain worn around the neck, were the only item of military-issued gear a soldier wore daily that included potentially life-saving information such as blood type and when a tetanus shot was administered.

A year before Davis died in the battle for Okinawa in April 1945, he earned one of the nation's highest military honors after surviving the bloody fighting on Saipan.

According to wartime records kept at the New York State Military Museum, home to many of the 27th Division's documents, Davis earned the Silver Star on Saipan in June 1944 for risking his own life to rescue a wounded comrade "at a time when the American front was undergoing brutal Japanese artillery and mortar fire."

Davis went into the Army in September 1941, three months before the Japanese attack on Pearl Harbor drew the U.S. into World War II. He served in the 165th Infantry Regiment of the 27th Infantry Division, a New York National Guard unit mobilized into active service in 1940.

Davis was with the 27th when it took part in the Okinawa invasion, which began on April 1, 1945. Three weeks later, he was shot by a Japanese sniper while again helping a wounded soldier, according to what Hollingsworth says military officials told the family. 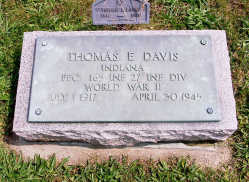 Four years after his death on Okinawa in 1945, the body of Roachdale native Pfc. Thomas E. Davis was transported back to Putnam County for burial at Roachdale Cemetery. (Courtesy of FindAGrave.com)

Davis died April 30, two months shy of his 28th birthday. Four years later, his body was brought back for reburial in his hometown.

Hollingsworth said Tom Davis, of Victoria, a 57-year-old machinist who was named after his uncle, will likely get the dog tag.