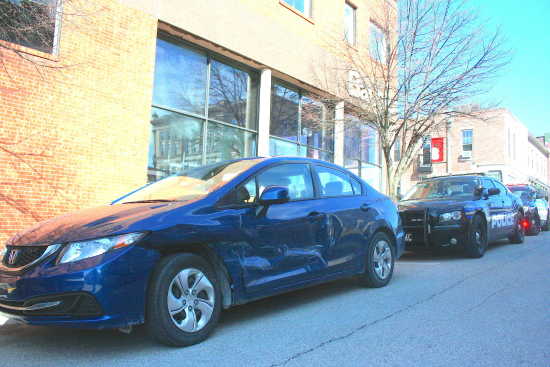 A blue Honda sits outside the Banner Graphic newspaper downtown Wednesday after a two-vehicle collision occurred at the intersection of Jackson and Franklin streets; no injuries were reported. (Banner Graphic/NICK WILSON)

Shortly after 2 p.m. on Wednesday, the Greencastle Police Department responded to a motor-vehicle accident that occurred at the intersection of Jackson and Franklin streets downtown.

Richard Turner, the driver of a blue 2013 Honda Civic, was southbound on U.S. 231 as he approached the downtown square.

As he crossed Franklin Street he was struck from the left (east) as 75-year old driver Edna Shamel attempted to cross Jackson Street outside the Banner Graphic newspaper.

"It was an honest accident," Turner said, noting the difficulty of and precarious nature of the intersection. "The sun was glaring right in their eyes, I don't blame them for having trouble."

Diane Huber, passenger in the 1994 Oldsmobile driven by Shamel, said the situation the intersection created was "crazy."

"We were just trying to cross the street with the sun in our eyes, and there's so much traffic."

GPD officers Nick Eastham and Josh Smith were on the scene and assisted in the cleanup of debris from the roadway.

The afternoon accident followed another downtown collision involving injury that occurred at approximately 9:30 a.m. just south of the square.