By Will Willems, for the Banner Graphic 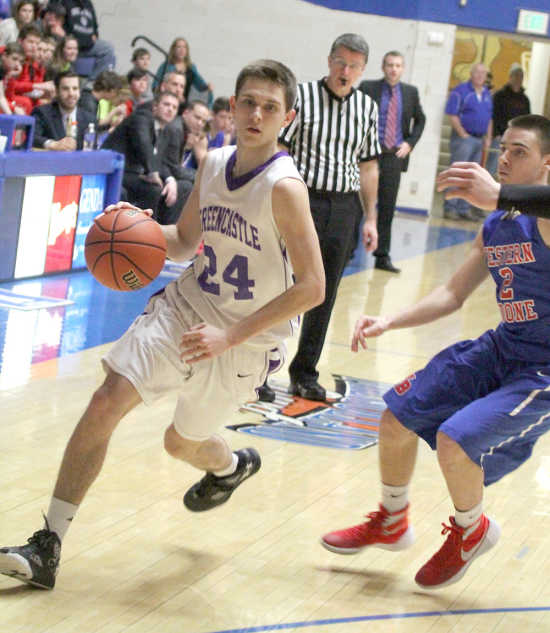 FRANKFORT -- The Greencastle boys' basketball team saw a decent sectional draw in the Frankfort sectional as the IHSAA pitted the Tiger Cubs against a Western Boone team that narrowly defeated them in an overtime match. But GHS had a tough time getting momentum Wednesday.

The Stars held Greencastle to 36.7 percent shooting (18 of 49), including 33 percent in the first three quarters and topped the Tiger Cubs 64-48 in the sectional opener Wednesday night at Frankfort.

The two teams met on Jan. 23, with Western Boone winning a two-point contest in overtime after overcoming a 10-point deficit in the final 2:54 of regulation.

This game was completely different from the opening tip and with the exception of a 4:30 stretch spanning the first and second quarters, Greencastle could never get going.

"I thought we got off to a really poor start on both ends of the floor," Greencastle head coach Troy Greenlee said. "We allowed them to cut and get the ball in places that we just can't let an offense get to. Offensively we had good shots, we just didn't hit them early and that got us down. They are a hard team to come back against because they can hold the ball and get it to where they need to. Putting ourselves in a hole early was a difference."

Howell said that while the Stars were in their mini drought to end the first quarter, they continued to stress their defense.

"We told the guys that we had to keep our defensive intensity up," Howell said. "If they kept on taking off-balance shots, that was good for us. Offensively, we had to be patient. When we were patient in the second quarter, we scored. When you get stops, combined with scores, it is always a good thing."

Greencastle appeared to steal some momentum in the final two minutes of the first half, scoring the final five points, including a buzzer-beating 3-pointer by Coble to cut the deficit to 24-17.

But coming out of the locker room, the Stars took that momentum right back. Zach McMann scored all eight of his points in a 15-2 run that put the Stars up 39-19 with 2:25 left in the third quarter.

"We did a great job defensively," Howell said. "We did a good job of in the half-court and keeping (Ryan) Coble and (Colin) York in check. We knew they wanted to penetrate and kick, which they did late, but for three quarters we did a good job of knowing where they were and making them work for every shot they took. We brought it defensively and when we do that we can win some games."

The Tiger Cubs had a tough time stopping Western Boone, which made it tough to get it rolling in.

"That was pretty deflating," Greenlee said. "Both halves started poorly for us and it has been kind of a thing for us all year -- we have been able to score the ball pretty well, but defensively we struggled. It is just hard to build any momentum in a game when you can't rely on your defense to get stops. It bit us tonight."

The Stars led by 17 at the end of the third quarter and hit 14 of 17 free throws in the fourth quarter to never allow Greencastle to challenge down the stretch.

Coble, who came into the game fifth in the state in scoring in averaging 28.0 points a game, scored 26 in his final game to lead the Tiger Cubs.

He finished the season with 642 points on the season.

"Ryan has been fantastic for us since he came into the program as a freshman," Greenlee said. "He is a kid that relied on to do a lot for us on the offensive end and to his credit he put a lot of time and effort into becoming a great basketball player. I hate to see this as his last game, but he has taken us very far at times and I am very proud of his effort."

York added 15 points for the Tiger Cubs, while the rest of the team combined for just seven points.

Marshall Hodgen led the Stars with 25 points on 7 of 10 shooting. Kaleb McCloskey had 17 and McMann had 8.