Fatigued driving results in I-70 crash near Cloverdale 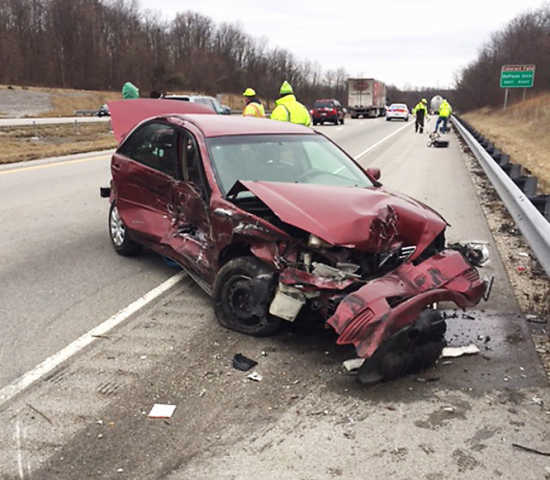 A 2006 Toyota is a total loss Wednesday afternoon after the driver, Jonathan Nichols-Pethick, 49, Terre Haute, apparently fell asleep at the wheel in the westbound lanes of Interstate 70, went into the median, overcorrected and skidded broadside into a westbound tractor-trailer.

CLOVERDALE -- Authorities are blaming a two-vehicle accident in Putnam County Wednesday afternoon on a fatigued driver.

Indiana State Police and Putnam County emergency agencies responded to the two-vehicle accident in the westbound lanes of Interstate 70 near the 42-mile marker, a mile east of Cloverdale, at approximately 1:30 p.m.

Preliminary investigation revealed that Jonathan Nichols-Pethick, 49, of Terre Haute, was westbound in his 2006 Toyota when he reportedly fell asleep and traveled into the median.

Nichols-Pethic then reportedly overcorrected, traveled back into the westbound lanes, and skidded broadside into a westbound tractor-trailer.

The 2015 Freightliner tractor, driven by 43-year-old Mark Bishop of Cheney, Kan., then struck the passenger car and both vehicles impacted the guardrail.

Nichols-Pethick was transported to Putnam County Hospital for treatment of non-life threatening injuries. No other injuries reported.

Nichols-Pethick was cited for driving left of center.