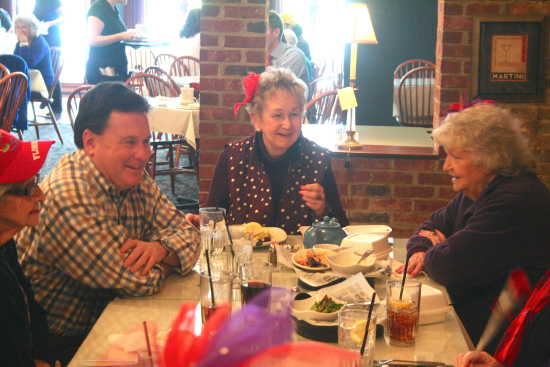 With an approach that hearkened back to the days of "Tippecanoe and Tyler Too" and "We Like Ike," 4th District Congressman Todd Rokita visited folks at Almost Home restaurant in downtown Greencastle Wednesday as he prepares for yet another election bid.

A member of the House since his election in 2011, Republican Rokita has spent much of his time representing Indiana's fourth and largest congressional district (16 counties) in the nation's capital by expanding education reform and focusing on social security for young people.

However, on this particular day, Rokita was focused on Putnam County residents and students alike as he not only made multiple stops downtown but also spoke with students at South Putnam High School in an afternoon tour of the area.

"The man is a megalomaniac," Rokita said of Trump. "I think (Republican) Marco Rubio is a better representation of our party."

Another, perhaps more appropriate question posed was: 'Why are you taking away my social security?'

Rokita responded by making the distinction that measures will not change for those already receiving social security.

"This is why I want to make stops like this and why I want to talk to one constituent at a time," Rokita said to the Banner Graphic. "They hear that all social security is being changed or taken away -- that's not true.

"As subcommittee chairman of the Higher Education Act, I recognize this and want to be able to make that distinction for people."

Diner stops and school-visits aren't the only ways Rokita is currently reaching out to Hoosiers -- Rokita and his aides have traveled more than 1,500 miles in recent weeks, speaking at restaurants, editorial boards and community centers.

In fact, though the native Hoosier and Wabash College graduate is focusing on Indiana, he also represents education on a national level, touring places like Arizona, Massachusetts, New York and Florida in the coming weeks.

For more information concerning Rokita, his policies or his campaign trail, visit rokita.house.gov or call his office at 317-718-0404.