Michael Dwain Goldman, 55, of Poland, Ind., formerly of Cloverdale, passed away unexpectedly at his residence on Monday, March 7, 2016. 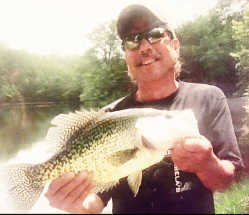 Please pray for the recent loss of his beloved nephew, Logan Chalfant.

Michael was a man of deep faith and he felt most at peace on or around a body of water or in the woods. He was an avid outdoorsman who was an exceptional hunter and fisherman.

Mike enjoyed golfing, playing cards and being with his family. He never gave up hope on his Chicago Cubs, and was a huge IU basketball fan and Notre Dame football fan.

His happy place was his own pond with his family and friends. It was hard to pull Mike away from "Goldman Hollar."

A Celebration of Life will be held on Saturday, March 19 from 3-6 p.m. at the Conservation Club in Danville.

Contributions can be made to the Danville Conservation Club and the American Heart Association.