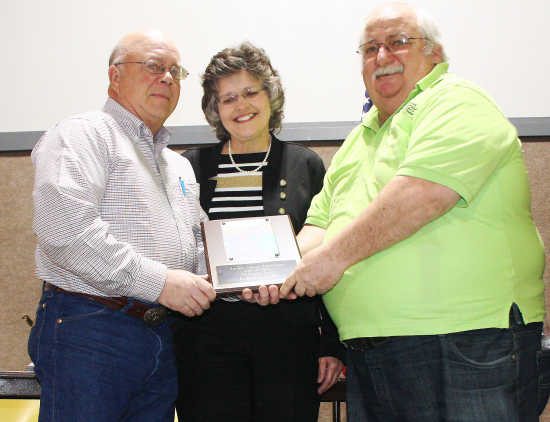 Two major Ag Day awards honored longtime members of the local farming community during the annual Ag Day breakfast Saturday morning at the fairgrounds. Phil and Janice Fry (above) of Roachdale receive the plaque as Farm Family of the Year from Steve Cash of the Putnam County Ag Day Committee, while Dr. John Scamahorn gets his award from Cash as the 2016 Friend of Farming. (Banner Graphic/ERIC BERNSEE)
Order this photo

A third-generation Roachdale farm family and a longtime Greencastle veterinarian were honored Saturday morning with the annual Hall of Fame awards during the Putnam County Ag Day Breakfast at the Community Building..

Phil and Janice Fry, who farm 300 acres of row crops and manage a 50-cow Shorthorn cattle herd, were named the 2016 Farm Family of the Year, while Dr. John Scamahorn, who has retired as Rabbit Barn superintendent at the Putnam County Fair after 28 years, was honored as the 2016 Friend of Farming. 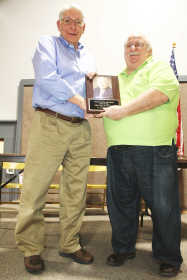 "The farm I live on and run belonged to my grandfather, Clifford Fry," Phil Fry told the Banner Graphic after receiving the surprise honor at the conclusion of the annual Ag Breakfast.

Of course, Phil is the son of Noble and Edith Fry, longtime fixtures in the Putnam County farming community who actually won the same honor themselves a number of years ago.

Phil and Janice Fry have three children -- all of whom graduated from Purdue University and are now involved in the agriculture field in some manner.

"And they all raise livestock in addition," Janice Fry added.

Son Matt, a grain buyer, also helps his dad with the family farm at Roachdale, while Matt's wife, Ann, is in agriculture as well, working for the National Swine Registry.

The Frys' twin daughters, Jessica Jennings and Kristen Stafford, are both involved in the animal health field while helping their husbands with their own family farm operations.

Jessica and Aaron Jennings raise 300 head of sheep south of Lafayette, while Kristen and Jordan Stafford live at Kempton and raise corn, beans and wheat along with managing a large hog operation.

So the apple has not fallen far from the Fry family tree.

"My wife Janice works for Dave Murray (who owns Murray and Associates National Center for College Costs) there in Greencastle," Phil said, "and our main goal was getting our children through college to give them that advantage."

Wife Janice, in addition to helping Phil with the many responsibilities that go with being a farm wife, is also the talented creator of all the purple championship banners that Putnam County Fair winners so proudly display each summer.

In addition to his chores on the family farm, where he grows corn and soybeans and tends 100 acres of hay, Phil works fulltime at Tractor Supply Co. in Greencastle. The Frys were honored in 2015 at the Indiana Shorthorn Breeders of the Year.

Friend of Farming winner Scamahorn, meanwhile, told how he never expected to make Putnam County his home but has now resided here for 44 years.

"I came down here to take a summer job for three months," Dr. Scamahorn told the Banner Graphic. "I graduated from Vet School at Purdue in 1972, and needed a summer job.

"My summer job turned into 44 years," added the personable veterinarian who owns and operates Animal Medical Clinic on the north side of Greencastle, about a stone's throw from the fairgrounds.

"The kids grew up and moved away and we're still here," he said of himself and wife Mary Jane who has been involved with the fair herself for many years. "We're not going anywhere."

After 28 years as 4-H Rabbit superintendent, Scamahorn has handed those reins to Dawn Overbay, although he plans to still remain active as a leader.

Under his watch, the 4-H Rabbit project outgrew its tented site covering a maze of cages and built a permanent structure that has since been added onto.

"The best part of it all," the Friend of Farming winner said, "is all the good leaders who have helped me. Things got done. That's what has made it fun over all the years."