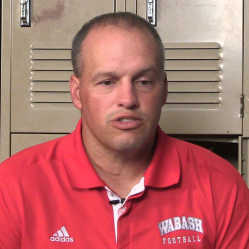 Perhaps, then, Raeburn's departure for Division I FCS Savannah State, announced Monday by Wabash, gives the DePauw faithful reason for hope in the future of the series.

In Reaburn's eight season in Crawfordsville, he guided the Little Giants to a 78-13 record, including 54-6 in the North Coast Athletic Conference.

That tenure has also included three NCAC titles and two undefeated regular seasons. Those two seasons, 2011 and 2015, both included runs to the NCAA quarterfinals.

Including his eight years at Coe College, Raeburn has an overall head coaching record of 135-39 (776).

Into those large shoes steps Don Morel, the Little Giants' offensive coordinator since 2011.

In those five years, the Little Giants have averaged 37 points per game, won 51 games and made three playoff appearances. 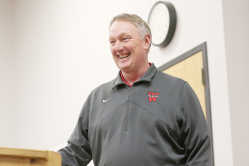 In the last three years, Wabash has averaged nearly 41 points per game and been ranked in the top-30 nationally in scoring offense.

Prior to his time at Wabash, Morel spent time at NCAA Division I Cal State Fullerton as offensive line coach and at Division III University of La Verne in La Verne, Calif., where he served for four years as offensive coordinator and 12 as head coach.

Wabash and DePauw meet annually in the Monon Bell Classic, having played 121 times since 1890, including every season since 1911. Wabash holds a 59-53-9 advantage in the rivalry. This includes a 40-37-6 edge since 1932, when the two schools began playing for the Monon Bell, a 300-pound railroad bell that was a gift of the Monon Railroad, which formerly ran between Greencastle and Crawfordsville.

Prior to Raeburn's tenure at Wabash, the two schools were tied in the overall series with 52 wins apiece.