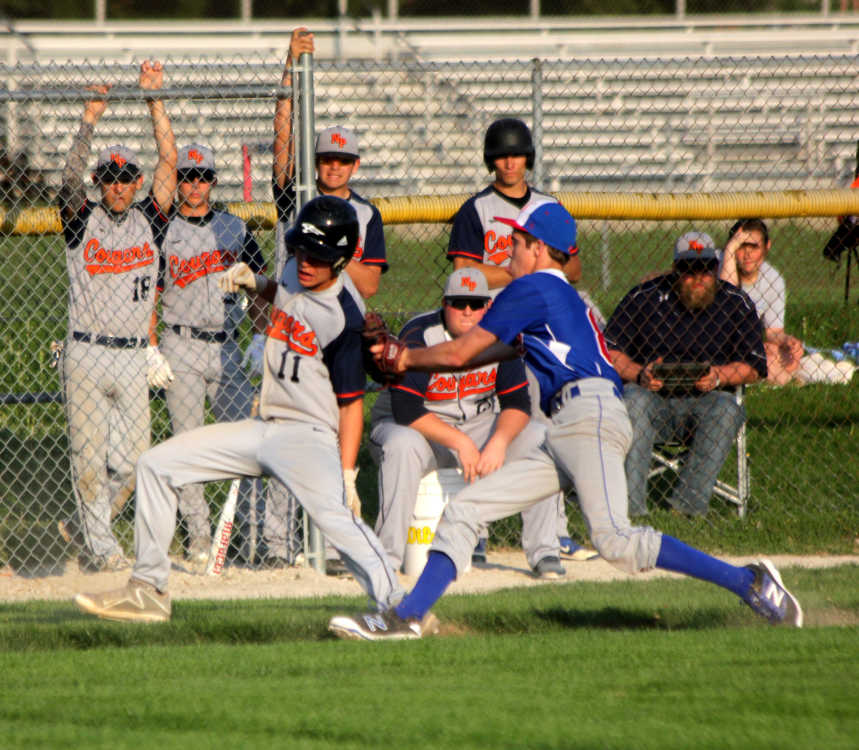 Good pitching has allowed the North Putnam baseball team to win two-thirds of its games so far this season, and the Cougars got a stellar performance from junior Jackson Kendall on Monday evening in a 9-1 win at South Putnam.

Kendall allowed just four hits to the Eagles, walking only one and striking out seven.

"He's one of our top four pitchers, and their ERA is about 2.2 runs per game," coach Brian Jeter said. "I don't think there are many better four-man staffs around. Jackson did a great job."

The Cougars manufactured a run in the second inning as Daniel Huffman struck out but reached as the third strike got past the catcher, went to second on a wild pitch, went to third on another wild pitch and came home on an errant throw to third.

That run was the only one of the first four innings. Two pitchers held the Cougars in check otherwise, while Kendall retired 11 straight after walking the first hitter of the game before picking him off first base.

North Putnam (8-4) broke the game open with six runs in the top of the fifth.

Max Haste followed with a walk to bring home another run, and cause South Putnam to make a pitching change.

Coach Jeter put on a squeeze bunt on the first pitch by the Eagle reliever with Huffman at the plate, and the ball was overthrown into right field with three runners scoring on the play.

Kendall scored Huffman with a groundout.

South Putnam (4-8) had its best rally of the game in the bottom of the fifth. Grady McHugh started the rally with a single and was sacrificed to second by Kody Britton.

Kyle Hall and Taylor Bush hit back-to-back singles to bring home McHugh, but Kendall was able to put out the fire.

North Putnam added a pair of runs in the top of the sixth on a two-run single by Jeter.

Kendall struck out five of the final six Eagle hitters to wrap up the victory.

"North Putnam has a good team," South Putnam Coach Brady Rhodes said. "We hung in there for a while, but the fifth inning was a bad one for us."

Coach Jeter thought his team did a good job of putting pressure on the Eagle defenders.

"We have been focusing on keeping our strikeouts down and just putting the ball in play," he said. "Many high school teams will make errors if you can do that. The suicide bunt was a big play for us."

Highlights -- Kyler Jeter had two singles for North Putnam, adding two RBI, and was the only player in the game with more than one hit.

South Putnam came up with two runs in the bottom of the sixth inning on clutch RBI singles by Grace Carr and Logan Hawkins to record a 4-3 win over North Putnam in high school softball action.

The Eagles scored single runs in the second and third innings to take an early 2-0 lead.

In the second, Katie Hewitt and Carr led off with singles and Helen Eaglin followed with another single to bring home the first run. The third-inning run came as Makenzi Myers singled, was sacrificed to second by Lillie Stein and scored on a single by Hewitt.

North Putnam took its only lead with three runs in the top of the fifth.

Bronwyn Spencer and Sierra Spencer singled to open the rally, and Reilly Tucker and Kaleigh Storm both reached on fielder's choices.

The Cougar runs scored as Skylar Clifford walked with the bases loaded and Chloe LaPierre and Mia Runnels were then both hit by a pitch.

One out later, Hawkins got the game-winning hit to score Hewitt.

Freshman pitcher Sydney Jackman retired the first 11 North Putnam hitters, and allowed just three hits for the game before leaving in the fifth inning. She walked one and struck out seven.

"We played really good 'team' softball tonight," South Putnam coach Jamie Steffy said. "We got off to a good start, and even when North came back and actually took the lead we didn't panic or get concerned - we just stayed together as team.

"That is a sign of a good team buying in to what we are stressing philosophically to the girls every day."

Steffy knew his team would be challenged in the county rivalry game.

"North Putnam is a good team," he said. "They play really hard and we knew they would come ready to play. We had a good game plan going in to the game through our scouting, and our girls did every thing we asked them to do to have a chance to be successful."

Steffy noted the defensive improvement his team is making with being a key factor in the win.

"Our defense is getting better every game," he said. "When we are able to play as solid defensively as we did tonight, good things will continue to happen to our team."

Steffy also thanked Endeavor Communications for telecasting the game live for the first time, and praised the players for handling the situation well.

"Both teams deserve a lot of credit to be able to perform that well under unique and stressful situations," he said. "Being able to have our game broadcast on live TV for the first time and then archived so the girls and their families/friends on both teams can go back and watch it as a positive, rewarding experience that both North and South Putnam softball girls and their families will always cherish and remember.

"We cannot thank Endeavor Communications enough for provided a rewarding educational experience to both teams and schools."

Highlights - Katie Hewitt had three singles for South Putnam, while Grace Carr added two singles. No Cougars had more than one hit.