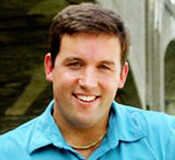 "This is not the party of my hero, Abraham Lincoln," said Crane, who is challenging incumbent State Sen. Pete Miller in the District 24 race

"That the Republican leadership in our state would attack another fellow Republican in this malicious manner emphasizes why conservative voters are seeking new leadership in District 24," Crane added.

The Senatorial Committee, an organ of the Senate Leadership, has reportedly mailed a postcard to Hoosier voters stating that in 2008 Crane voted for President Obama.

"That statement is false. Period," Crane emphasized Tuesday. "I have always done everything in my limited power to oppose Obama and his liberal agenda. That my opponents would falsely suggest otherwise reveals the extent to which the incumbent must 'win at all costs.'

"Furthermore, this action violates the sanctity of our cherished voting process by claiming to know, and then advertise, how a citizen voted in the privacy of the voting booth," Crane said. "This should concern all Hoosiers."

Jodi Smith, an active member of the Hendricks County Republican Party, and a Crane campaign volunteer, was cited as a source of this information, which has been emphatically denied by Smith.