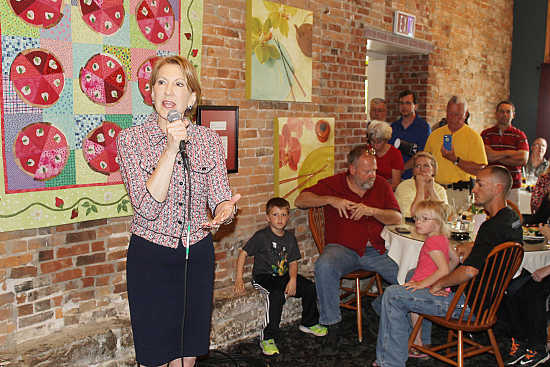 Less than 48 hours from the pivotal Indiana primary, Fiorina used most of her nine-minute speech to extol the positives of Sen. Ted Cruz, her running mate who trails Trump in most state polls of likely Republican voters.

In a few succinct remarks, however, Fiorina called into question the outsider and maverick persona Trump has built among many voters.

"Donald Trump will not challenge the system because he is the system," she continued. "He is a crony capitalist. He is a guy who has made his billions buying people like a Hillary Clinton or a John Boehner off."

The vice presidential candidate drew upon Trump's past campaign contributions to Boehner, the Republican former speaker of the House who recently called Cruz "Lucifer in the flesh" and to Nancy Pelosi, the Democratic member of Congress from California's 12th District.

Fiorina also said Trump has invested in Hillary Clinton's campaigns "not once, not twice, but seven times."

"Guess what, folks, you can't count on him," she said.

And so she asked not only for the votes of those present, but to talk to potential Trump supporters around them.

The vice presidential candidate sees big consequences for this election.

"Truly the soul of our party and the future of our nation hang in the balance."

Look for more stories on the campaign stop by Fiorina and Heidi Cruz at bannergraphic.com and in Monday's Banner Graphic.