ROCHESTER, N.Y. --The 10th-ranked Rhodes College men's golf team remains in 11th place after shooting a 310 (+22) for a three-round score of 922 (+62) on Thursday morning at the Division III NCAA Golf Championship at Midvale Country Club.

Sophomore Alec Davis of Greencastle shot an 80 (+8) on Thursday, fourth best on the team. 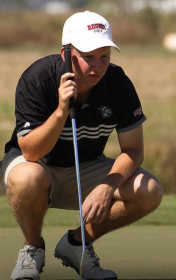 No. 2-ranked Claremont-Mudd-Scripps continues to lead the event with a three-round score of +15 while Otterbein moved up four spaces to move into second place with a score of +35.

Top-ranked Methodist is third at +36 while No. 7 Huntingdon and No. 8 Wittenberg are in a tie for fourth at +37 each.

Sophomore Chris Harris put together his best round of the tournament on Thursday, shooting a 73 (+1) on the day which included three birdies for a three-round score of 232 (+17).

The Lynx will move into the final round of play this morning at Mendon Golf Club.

They will be paired with Illinois Wesleyan and Franklin & Marshall and will tee off at 8:50 a.m. (EST).