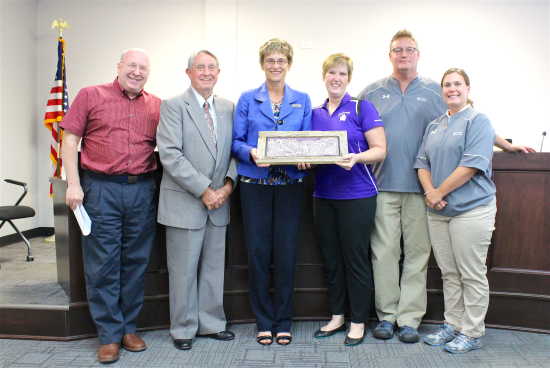 Tears of joy and sorrow not only capped off Greencastle School's public session Monday, they also capped off an illustrious career for outgoing GCSC Superintendent Dawn Puckett.

Though she officially retired at the end of the 2016-17 academic year, Puckett has maintained the role of superintendent to assist in the selection process of her replacement and to ensure a good start to the new school year.

The long-time community leader, who has contributed 36 years as an educator and nearly 30 in service to the Greencastle Community School Corporation as superintendent, assistant superintendent, English teacher and technology integrator, said goodbye Monday to a board room full of well-wishers and gratitude that poured from those who have been proud to call her coworker, adviser and mentor.

"We're thankful that you have given us 29 years," Board President Denise Sigworth said. "You've guided us; you've calmed us; you've restored trust in the corporation; your work has never been doubted; you base decisions on what is best for the child; and, most importantly, you should know that you are loved by each of us."

Receiving a commemorative plaque that read "It's a great day to be a Tiger Cub," Puckett gasped with appreciation as she examined the cartouche, which consisted of images of books, buses, athletic fields and even a tiger.

"I became a teacher at Greencastle right after college," Puckett said. "I'd always wanted to be a teacher.

"My grandmother was a teacher in a one-room school house, literally, as a young woman, and I would go to her house to hear her stories," Puckett continued. "Every Friday we would get a new book off of the shelf and I just knew, from a very young age, that I wanted to be a teacher. I never ever dreamed that I would end up in this position ... and I want to thank (GCSC) for the opportunity because I feel like I have had the chance to grow so much as a person and give to Greencastle Schools but -- the reality of it is -- the true benefit has been mine."

A 1976 graduate of South Putnam High School, Puckett was first introduced to GCSC in 1980 after receiving her degree from the University of Indianapolis. After dealing with unfortunate employee reduction in 1981, Puckett returned a year later as an English teacher, a position she held until 2004 when she moved into technology integration.

It was during the 2012-13 school year that she became interim superintendent, only to officially be named full superintendent at the end of the same year.

Now, after nearly four years at the helm, Puckett is leaving the corporation in much better shape than it was when she first stepped on board, said Greencastle High School Principal Russ Hesler.

"I just want to say thank you for righting this ship," Hesler said to Puckett as board members and attendants alike looked on. "We were bobbing and the lifejackets were out.

"We on a downward spiral," Hesler continued. "Thank you for lifting us up and for being a force here at the school."

Luckily for her coworkers, friends and family, Puckett isn't done quite yet. And retirement ceremony is scheduled for Thursday, Aug. 18 and will take place from 3:30-5 p.m. at the GCSC Central Office, located at 1002 Mill Pond Ln. in Greencastle.