NP 'road warriors' don't really care who or where they play 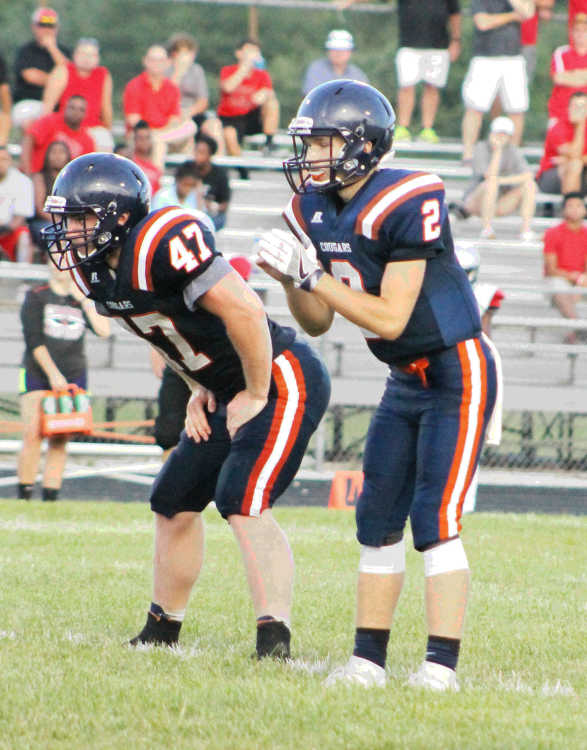 North Putnam running back Solomon Gross (47) and quarterback Hayden Rudes (2) wait for the snap in Friday's scrimmage against Indianapolis Ritter.

North Putnam's football team finished 9-3 last year, a season that did not end the way the Cougars wanted.

NP finished second in the East Division of the Western Indiana Conference and advanced to the sectional championship game, but was defeated 50-0 by eventual state champion Monrovia.

Several key graduates departed from that team, including Putnam County "Defensive Player of the Year" Brayden White, but coach Greg Barrett has several people returning who played key roles a year ago.

"Things have gone really well," Barrett said last week. "We have good senior leadership and good junior leadership, and we have a lot of kids back who have played.

"We are still pretty young, but that's a good thing," he added. "We're pretty excited about the year."

Barrett noted that top priorities as the regular season approaches are to secure the offensive and defensive front lines.

"We have to get it consistent," he said. "If we get consistent play out of them, we'll have a chance. That's a weakness we need to improve on. Everybody has one."

Familiarity is not a problem for the 2016 Cougars.

"This is a group of guys who have bene playing together for a while," Barrett noted. "Several of them have played since they were freshmen. It helps when you know you have kids going in the right direction and going on the same page.

"We're getting better every day."

Two third-year starters will key the Cougars in the offensive backfield in quarterback Hayden Rudes and running back Ethan Christy.

"They are both experienced and they do a nice job for us," Barrett said. "Our skill positions will be a strength, and we have good linemen stepping up to replace those who graduated."

Rudes passed for 1,151 yards and 10 touchdowns a year ago, while also rushing for only 79 yards but reaching the end zone 10 times. Christy ran for 404 yards and six touchdowns.

Judy ran for 129 yards and a touchdown last year, but Barrett said that's not his best contribution.

"He's a really good blocker for us," he said.

Senior linebacker Solomon Gross (6-2, 230) is another defensive leader, along with Judy, senior Justin Laffin and junior Dylan Hess at cornerback. Bell and junior Jake Scott lead the pack at safety.

Because of this change, the Cougars inherited the conference schedule that South Vermillion was going to play -- leaving them with four straight road games to start the season.

Barrett doesn't get caught up in things like that.

"There is no doubt the conference is going to be good," he said. "There is not an easy team for anybody to play. It's very competitive, and we're excited.

"We're in a new division this year," Barrett added. "The schedule will favor us next year, so we just play who we play."

Barrett is glad the schedule changes and difficulty isn't a big deal for his players, either.

"Having the first four games on the road, we're just going to have to be road warriors," he said. "We're OK with that. The kids don't think about it or talk about it.

"We don't care where we play, we just want to play."

Barrett admits that the sectional is so far away he hasn't put any thought into the potential opponents when that time comes, although he'll probably never forget last year's Monrovia game and a tough semifinal battle with Paoli the week before.

"We have a lot of goals in mind, and we're going to try to knock them off one at a time," he said. "We've had good success and tradition over the last several years, and that helps our kids."

Barrett credits the coaches in his middle school program for helping get the players ready for the varsity level.

"That makes it nice, and the excitement is outstanding," he said. "Football in our county is good, and always has been."