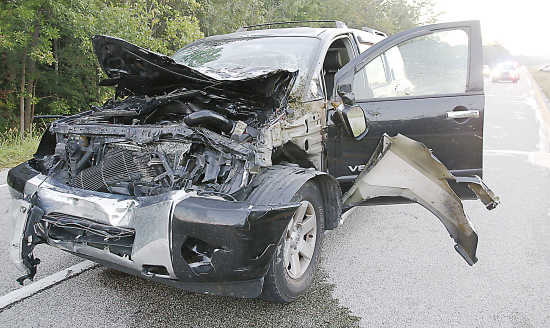 A Tuesday morning collision with a horse on U.S. 40 west of Reelsville totaled the 2005 Nissan Armada driven by Dustin Dostin of Danville. The animal was also killed in the crash.
Courtesy of Putnam County Sheriff’s Department

Dustin D. Dostin, 30, was westbound on U.S. 40 near the County Road 800 West intersection between Reelsville and the Clay County line in a 2005 Nissan Armada.

About 45 minutes before sunrise, conditions were still dark in the area and Dostin did not see two horses in the roadway in time to react, colliding with one of the animals.

The impact threw the horse into the median and heavily damaged the front end of the vehicle.

Dostin was uninjured in the crash, but the animal was killed and the vehicle was totaled.

Putnam County Sheriff’s Deputies Matt Biggs and Scott Ducker responded to the crash, along with Sheriff Scott Stockton. Due to the nature of the incident, animal control officers Randy Patrick and Rodney Cline were also dispatched.

While the totaled vehicle was easily removed from the scene by Seniour’s Towing, removing the 1,200-pound deceased animal was more of a task.

For that, the deputies expressed their thanks to C.C. Cook & Son Lumber Co., which brought a front end loader to the scene. Loaded on a truck, the dead horse was donated to the Exotic Feline Rescue Center in Center Point.

Also assisting with cleanup and traffic control at the scene were the Reelsville Volunteer Fire Department and the Indiana Department of Transportation.

The other horse was not involved in the crash and was returned to owner Leanne Roe of Reelsville.

Sheriff Stockton said a crash such as this can serve as a reminder to livestock owners of the risk involved when animals escape.

“Animal owners have a duty to ensure the security of their fences — they can be held liable,” Stockton said. “This might not be a bad time for livestock owners to get on their ATVs and check their fences, the electric connections and for washouts they may have had with recent rains.”

Deputy Biggs estimated damages to be at least $30,000.