Northview ground attack proves too much for Eagles 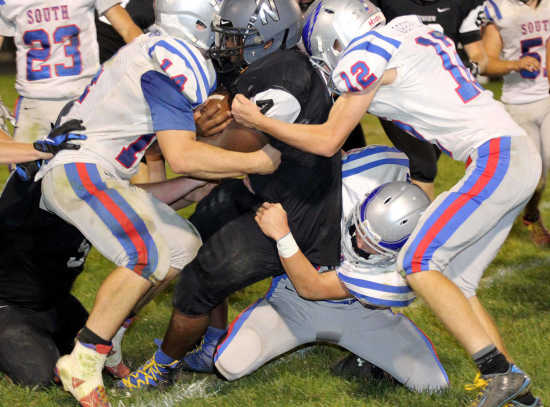 The Knights piled up more than 300 yards on the ground on their way to a 40-0 victory over the Eagles.

The loss drops the Eagles to 0-5 in the Western Indiana Conference Western Division and 3-5 overall.

Northview’s defense continued to play well after losing a 14-0 decision to Greencastle last weekend, holding the Eagles to just 63 first-half yards and 106 for the game.

The Knights took the opening kickoff and marched 59 yards on five plays behind a 37-yard run by Dylan Hyatt. He scored the first of his four touchdowns two plays later on a nine-yard sprint for a 7-0 lead.

The balance of the contest lay at the feet of each team’s running game.

All six of Northview’s touchdowns came via the ground while Northview was able to keep Eagle senior running back Kyle Shaffer mainly in check.

The powerful Eagle back came into the contest averaging 172 rushing yards per game (10th in the state), but was held to just 73 on 25 carries in the game. Meanwhile, Northview’s duo of Hyatt and MJ Shelton had 228 first-half yards on the way to a 34-0 lead at intermission.

Northview coach Mark Raetz, is well familiar with Shaffer, who played some of his youth football in Clay County.

“He is a tough player. Our kids all know him really well. He played in our youth league. These kids have grown up with him and he’s friends with a lot of them,” Raetz said of the Eagle senior. “I knew we would have our hands full trying to tackle him all night. He’s a tough competitor as you saw tonight. He’s a good kid. I’m just glad we were able to tackle him.”

Northview soon added a second score on a 16-yard TD run by Hyatt on the team’s third offensive possession. Shelton followed with a 38-yard score on the next drive. Meanwhile, the Knights had held the Eagles without a first down until the final drive of the half.

South Putnam cranked up the pace on its last possession and went no huddle for the final two minutes and had success.

Quarterback Christian Zeffel broke around the right side of the line for a 15-yard gain to start the drive. Shaffer followed with a nine-yard gallop and a six-yard burst through the left side. Shaffer carried five straight times as South Putnam moved the ball to the Knights’ 33-yard line.

From there however, the Eagles were down to just seven seconds and a pass was picked off by the Knights’ Thomas Hess to end the half.

South Putnam stuck with the no huddle, quick tempo approach in the second half as the Eagles got the football to start the third period.

Once again the Eagles moved the ball down the field as Zeffel hit Hunter Higgins with a 26-yard pass. Two plays later Zeffel found Shaffer on a delayed screen for a 17-yard gain to the Knights’ 19-yard line. However, Northview’s defense bore down and sacked Zeffel on third down for a 13-yard loss.

His fourth down pass was intercepted at the goal line by Jarrett Combs.

Northview followed with a 13-play scoring drive that culminated in Hyatt’s final score of the contest.

The Eagles weren’t able to gain a first down the remainder of the fourth quarter.