Suspect who briefly fled police can't get away from his past

A suspect who tried unsuccessfully to flee from police at the Putnam County Courthouse last Friday couldn't outrun his criminal history either.

Carey K. Carr, 50, Brownsburg, a suspect with nine separate sentences to the Indiana Department of Correction between 1989 and 2009, appeared before Judge Pro Tem Mindi Jackman-Hanlin in Putnam Superior Court Monday afternoon on two counts of resisting law enforcement in what appears to be just the latest of his indiscretions. 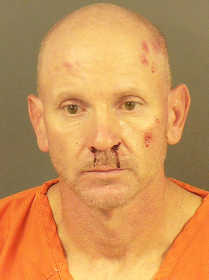 Carr's appearance also served as an initial hearing on a Level 5 felony count of burglary and a Level 6 felony count of theft in separate Sept. 8 incidents. It was his failure to appear in court on those charges that resulted in Judge Denny Bridges issuing a warrant for Carr's arrest.

And it was that warrant that set off the chain of events Monday when Greencastle Police Sgt. Ed Wilson first arrested the suspect at the courthouse and then chased him down on the north side of the square after the handcuffed Carr bolted from his custody while being placed in a squad car.

Judge Pro Tem Jackman-Hanlin entered not guilty pleas for the defendant, who was remanded to the custody of the Putnam County Jail.

"It looks like with what happened Oct. 14, you could be a flight risk," she noted, leaving Carr's bond at $30,000 cash only as originally set Friday by Judge Bridges. "It would be counterproductive to do otherwise," she added.

Carr likely didn't try to run just because of the theft and burglary charges he faces locally. He has also been implicated in a $30,000 August theft from Precision Controls, Indianapolis -- where he reportedly stole "tons of tools" and a silver Ford F-150 pickup truck -- and the Marion County theft of a Chevrolet Silverado, a trailer and Kubota tractor.

The truck and mower were reportedly stolen in separate incidents. The Kubota was reported stolen from the Zionsville business Earth and Turf, while the trailer was taken from Benjamin Franklin Plumbing. Plates on the truck and trailer had also been stolen from Marion County businesses.

According to the probable cause affidavit filed in the case, Carr was driving that truck and trailer with the Kubota in tow Sept. 8 when he first allegedly broke into the DePauw University Facilities Management Office at 801 S. Jackson St., about 5:05 p.m., and just 12 minutes later was reportedly caught on video walking out of the Walmart Supercenter with an Element 32 TV. He can also reportedly be seen on video placing the TV, valued at $142.31, in the same truck before driving off.

In the DePauw burglary, numerous gasoline-powered tools were taken after the east side overhead door was forced open, DPU Officer Matt Demmings reported. Among the items stolen were a Stihl hedge trimmer, a two Stihl chainsaws, an Echo chainsaw and a Homelite chainsaw. The loss was listed at approximately $3,000.

The suspect was able to elude arrest initially in the Putnam County cases but was apprehended about 5 p.m. Sept. 24 when Brownsburg Police responded to a theft in progress regarding an individual stealing gasoline. Carr was charged with auto theft, possession of methamphetamine and theft as a result of that incident.

He was released on bond in the Hendricks County case, pending a scheduled Nov. 30 jury trial.

However, Carr is now back in the Putnam County Jail. Austin Malayer was appointed as Carr's public defender with a pretrial conference set for 11 a.m. Dec. 14.

Carr is facing a Level 5 felony count of burglary, punishable by 1-6 years in prison, and a Level 6 felony count of theft, which carries a sentencing range of 6-30 months in jail.