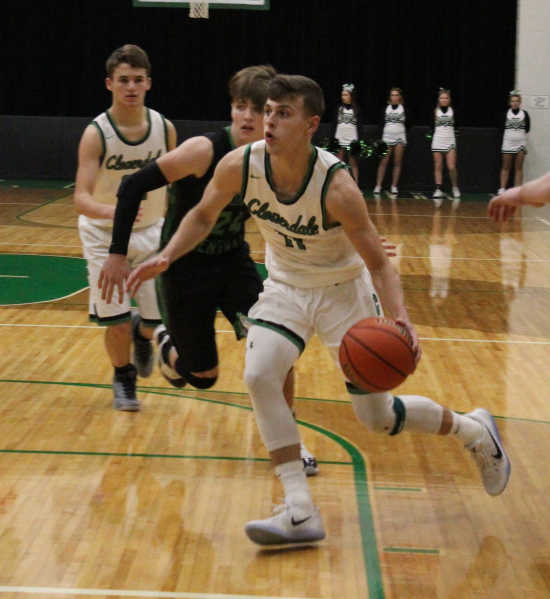 Cooper Neese drives to the hoop for the basket which put him into first place in the Putnam County boys’ scoring list.
Banner Graphic/Jared Jernagan

CLOVERDALE — Everyone in the gym at Cloverdale High School Tuesday — including Cooper Neese — knew what was going to happen after Neese hit his first bucket.

Tied with 1960 Bainbridge graduate Jeff Blue with 1,798 career points, Neese’s first point would put him over the top, all alone as the Putnam County boys’ basketball leader in points.

When Neese’s first point came — whenever it came — the game was going to stop.

Blue was going to congratulate Neese. Then the game would continue.

So everyone will have to forgive Neese if the competitive drive that brought him to this point also made him lose track of the moment.

“The funny part is that coach (Patrick Rady) said we were going to stop the game. Then I get out on the court and I don’t even remember,” Neese said.

“I hit the shot and I’m running back on defense and I hear the horn buzz. I’m like, ‘What are we doing?’ Then I finally remembered, I was like, ‘Oh, yeah, never mind.’”

The points came with 7:11 remaining in the first quarter, on the Clovers’ third possession. Trailing North Central 2-0 after an early turnover, Neese drove up the left side of the lane for an easy lay-up.

From there Cloverdale never looked back. That bucket sparked a 34-0 run that lasted into the second quarter and put the game away early, as the Clovers won 100-32.

After finishing with 26 points, Neese said he wasn’t too worried about when the record-breaking point might come.

“I figured if I let the game come to me like I normally do, it’ll get there, no matter if it was in the first quarter or the fourth quarter,” Neese said. “It was just fun to go out there with my guys and compete.”

More than once, Neese used the word “special” to describe the night. Special not only that he’d broken the record, but in meeting Blue, who held the record for 56 years.

“It was special. To actually get to meet him (Blue), a record holder for 50 years, is more than impressive,” Neese said. “So to break somebody like his record means a lot to me.”

Blue was more than happy to bestow the honor on a new generation, particularly a young man who, as Blue did, plans to matriculate at Butler University.

“After 56 years, it’s time,” Blue said. “I think the best part is, everybody tells me that Cooper is such a fine young man, along with his athletic ability.

“That makes it even more special for a young man like that to break a record that stood for so long. He’s the kind of caliber kid you hope will do it.” 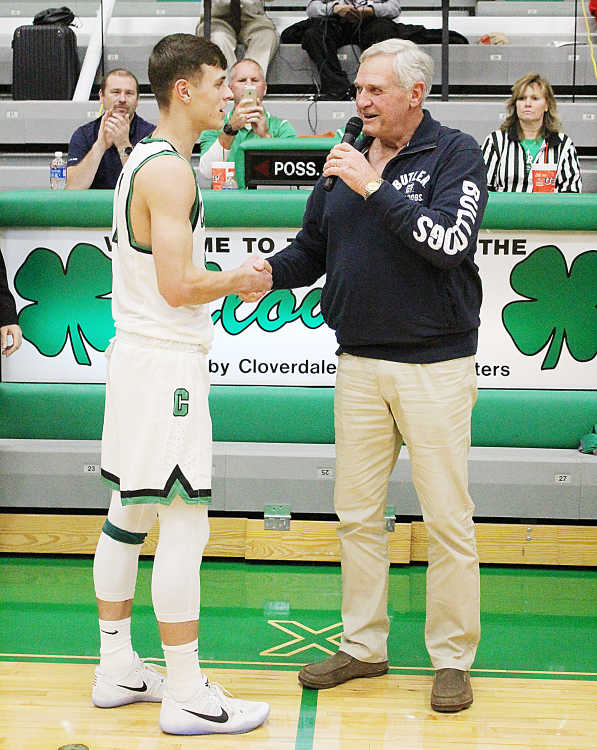 Getting Blue, who now lives in Columbus, to the game was the work of Cloverdale athletic director J.J. Wade. Blue was on board as soon as he heard about it.

The elder Bulldog will get plenty of chances to see Neese in the coming years.

“Of course, I’ve got season tickets to Butler. I’m just another one of those old guys up in the stands,” Blue said. “So we’ll get a chance to develop and see how he fits into the Big East and big time basketball.”

At hand now, though, is fitting in with Cloverdale and the Western Indiana Conference Basketball. Coach Patrick Rady is thankful for what Neese has done for the Clover program.

“He’s meant a lot to this program. He’s a Cloverdale kid — deep, deep Cloverdale ties. His father (Jerry) played here. I believe his grandfather played here. And his brother (Michael). They’ve been champions, too, for Cloverdale.”

The elder Rady, Tucker and Blue, all Indiana Basketball Hall of Famers, were in the house on Tuesday and yet all eyes were on Neese, a fact not lost on Patrick Rady.

It’s that past and the connection of sports and community that the coach knows his star player recognizes.

“You could tell watching him play when he was a fifth-, sixth-, seventh-, eighth-grader, that he just couldn’t wait until he got up here,” Rady said. “You knew it was going to be something special.

There’s also a beautiful symmetry to Neese’s accomplishments. As a freshman he poured in the first 36 of his points against this same North Central program.

Tuesday’s record-breaking performance was just another step in fulfilling the promise he showed that evening in November 2013.

“It’s kind of like if you see an artist that works very hard at their craft and you see the masterpieces that they put together,” Rady said. “It’s great to see somebody get rewarded for his hard work and effort that he’s put into the game that he really loves.”

True to form, Neese is a bit more reserved in speaking about himself.

“Tonight, the word I can think of for it is special. It’s memorable,” Neese said. “It’s something I’m going to cherish and thank God for the rest of my life.”