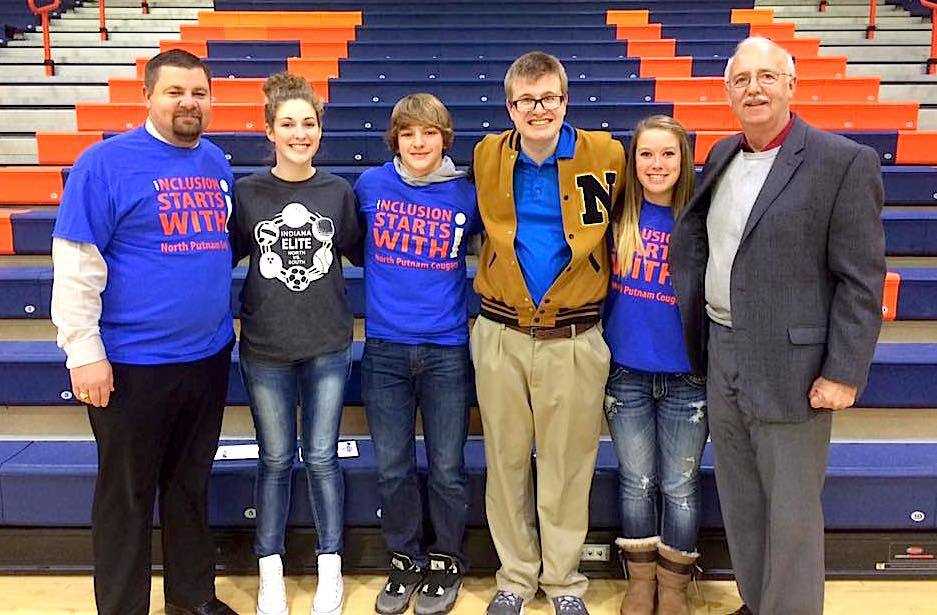 BAINBRIDGE -- A cheerleading state championship and an FFA national championship are not the only recent victories for North Putnam High School.

Now considered a Unified Champion School, NPHS has taken part in a statewide program titled Champions Together which aims to promote student leadership and unity through a collaborative partnership between the Indiana High School Athletic Association (IHSAA) and Special Olympics Indiana.

These local chapters are backed by Special Olympics International and the National Federation of High Schools through the much larger “Project Unify” program that supports Champions Together in efforts to encourage leadership among student athletes “while changing their lives and the lives of those with intellectual disabilities.”

NPHS Principal Jason Chew expressed to the Banner Graphic Monday that the success of this program fell completely on the shoulders of his students (as required by the initiative), with whom he could not be more proud.

“Kaelynn Abner has been our student leader for the program alongside an advisory committee,” Chew said. “She is currently in her second year of a two-year term for the position and is one of nine seniors throughout Indiana who represent more than 160,000 student athletes in the state.

“All of this is done through (IHSAA) and is really a push for schools to be all-inclusive,” Chew continued. “It’s also a chance for students who don’t have an opportunity to earn a varsity jacket or letter to get out there and feel like they’re part of the team.”

According to the program’s website, www.soindiana.org/champions-together, there are four requirements a school must meet in order to be presented with an award banner and considered a Unified Champion School:

• All school-sponsored activities must be planned, organized and administered by an Inclusive Student Leadership team that strives to do things with students with intellectual disabilities -- not for them.

• The school must participate in at least one activity designed around Whole School Engagement that promotes and encourages awareness, respect and inclusion of persons with intellectual disabilities.

• The school must organize and participate in at least one Unified Sports activity such as IHSAA Unified Track and Field, a Unified practice or clinic, or a Unified competition with students with intellectual disabilities or local Special Olympics athletes.

• The school must raise a minimum of $1,500 for the Champions Together project.

The banner and Unified Champion School designation recently bestowed upon North Putnam was actually a result of last year’s efforts -- an undertaking Abner and Principal Chew hope to duplicate for 2016.

“The banner we just received was for 2015. We raised $1,500-plus through selling T-shirts and accepting donations,” Chew said. “We also had a couple of (Unified athletic activities) in the fall last year during homecoming.

“We held a powder puff game with the girls and the same evening we held a unified football game too,” Chew added. “Then later in the school year we hosted a unified basketball game against Monrovia -- that was a really special thing to see.”

Chew went on to say that North Putnam hosted a convocation last year for the “whole-school activity” requirement but will be looking for other ways to fill the prerequisite in the future.

But, as for his involvement, Chew emphasized how proud he was of his students’ initiative and leadership.

“Kaelynn and other athletes have formed an advisory council to organize these things -- this is not an administrative directive at all,” Chew said. “She came back to North Putnam with the experience of the student advisory council and wanted to push for this. So she got a group of kids together and some adults to help as well and got this to where it is today.”

For more information about the efforts of the IHSAA, North Putnam, Champions Together and Special Olympics Indiana, visit www.soindiana.org or www.nputnam.k12.in.us. 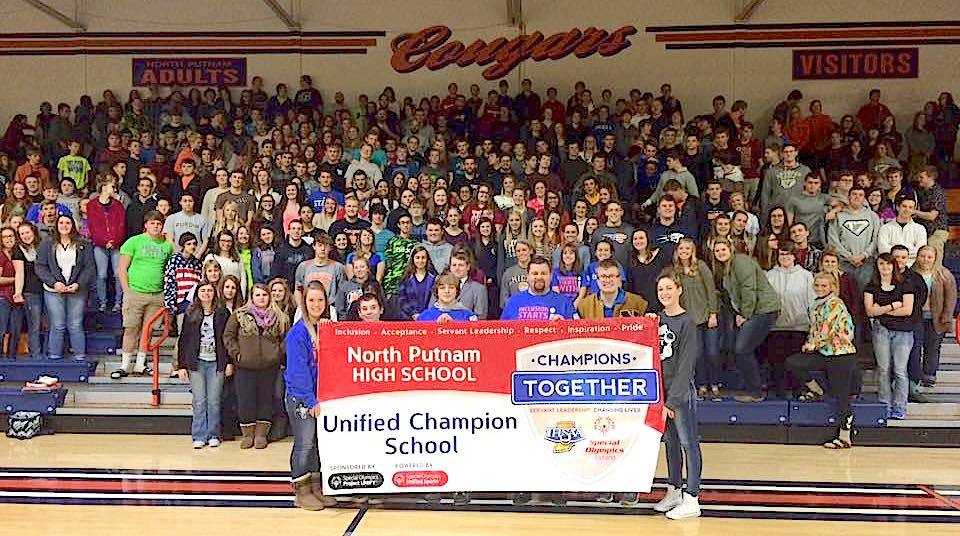 The entirety of North Putnam High School took part in a recent convocation during which the school received its Champions Together banner and Unified Champion School designation.
Courtesy photo
Respond to this story