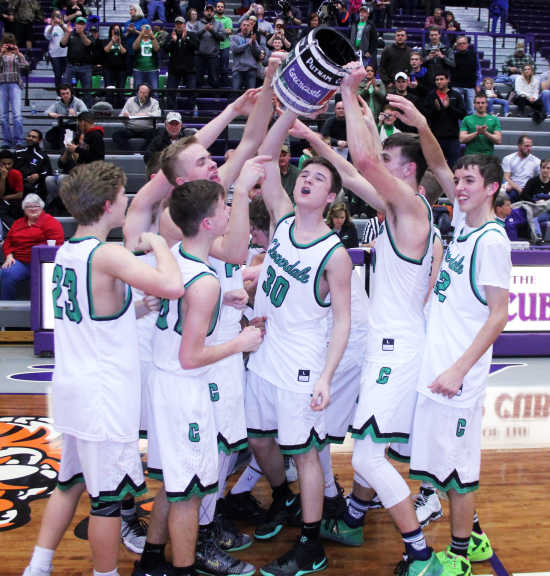 Patrick Rady has preached to his team about the importance of defense since his Clovers gave up 94 points in a regional loss to Northeastern last season.

At times this year, the Clovers have bought into those discussions and been successful; at other times, the inability to hold down the opponent cost them regardless of how many points they could rack up.

Rady picked up another invaluable example of that belief on Friday night in the championship game of the Putnam County Classic, as Cloverdale overcame a strong start by Greencastle to record a 65-48 victory for its second straight county title.

The Tiger Cubs were in no way awed by the high-scoring Clovers, coming out of the gates strongly and opening up a 15-1 lead after five minutes.

Greencastle had a 19-8 lead at the first stop and increased that advantage to 27-15 at the half.

After scoring just 15 points in the first half, the Clovers turned up their defensive intensity and racked up 30 points in the third period alone.

Junior guard Jalen Moore had 21 of those, and said the difference was energy.

“We knew that Greencastle is a good team and they would come out and punch us strong,” said Moore, who finished with 37 points. “We weren’t energized in the first half, and coach said we needed to come out with more energy in the second half. He said we needed to play our games and take over.”

Cooper Neese opened the second half with a layup for the Clovers, but Nick Costin countered with a trey to give Greencastle a 13-point lead at 30-17.

Moore then took over, scoring three straight baskets — the first on an assist from Neese — to cut the gap to seven.

Neese followed with a pair of free throws and Moore added another basket with 3:57 left in the third period to cut the gap to 30-27.

After Costin hit a free throw for the Tigers Cubs, it was a 10-0 run by the Clovers.

Two Moore baskets, one by Nick Winders — the team’s only points not scored by Neese or Moore — and a four-point play by Moore when he was fouled hitting a 3-pointer and hit the free throw for a 37-31 lead.

The Clovers completed the quarter hitting 12 of 13 shots, three of four from long range and many of the shots being Moore layups as he blew past the front line of defenders and snaked his way through the big men underneath. 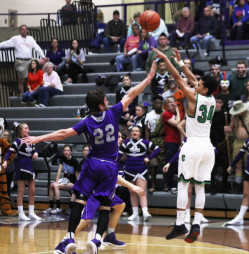 “I give credit to my big brothers,” Moore said for his rare ability to navigate through the enemy. “When I was in grade school, they would have their friends come over and they would push me and hit on me — but it made me tougher.”

The Clovers led 45-39 at the final stop, but kept the pressure on by opening the fourth quarter on a 12-2 run.

Neese had half of his 26 points in the final period, including a monstrous dunk with 1:49 left.

Colin York had nine of his team-high 25 points in the fourth quarter after getting 10 points in the first half and six more in the third period. Costin added eight.

Neese hit just two of nine field goal attempts in the first half, while Moore was two of seven. He said their inability to score limited their pressing opportunities, which have become a key part of their scoring pattern.

“We just weren’t hitting shots that we normally hit,” Neese said. “That made me upset with myself. Colin was hitting shots for them; we just needed to come out with more fire in the second half and we did.”

Rady remained undefeated in the Putnam County Classic with his second straight win.

“If we want to continue to have success, we have to play defense,” he said. “I thought we pressured the ball well in the third and fourth quarters. Our traps were solid and our weakside guys rotated better in the second half.”

Some observers may have anticipated the Tiger Cubs to slow the pace and try to reduce the number of possessions in the game, but that wasn’t the case.

York hit a basket to open the game for the Tiger Cubs, and after a Neese free throws the hosts ran off 13 straight behind two Gavin Bollman baskets, a trey and a free throw from Costin and another trey and basket from York.

“They played a little faster than they did the last time,” said Rady, whose team won 46-34 over Greencastle on Jan. 24. “You have to give them credit for hitting shots. We got down a little bit and then we stood on both offense and defense.

“Our offense definitely feeds off our defense.”

Greencastle coach Bryce Rector was predictably thrilled with how his team started the game.

“We executed our game plan the way we wanted to,” he said. “I’m proud of the way our guys started — they were ready to go. But we were tired, and because of that we were really bad in our transition defense.”

Neese is the state’s second-leading scorer this season at 28.4 points per game, and Moore is sixth at 26.5.

Rector has much respect for the most prolific 1-2 punch in the state.

“They have two studs,” he said. “You have to give them credit; that’s why they are the county champs.”

The Butler-bound Neese is the 10th-leading scorer in state history and deservedly attracts a great deal of attention.

Moore is a different style of player, and Rector notes there are several things that make defending him so difficult.

“He’s not easy to keep in front of you,” Rector said. “If you let him get out in transition he’ll kill you, and that’s what we did in this game. He’s an outstanding player.”

Rector’s team has made tremendous strides since its 0-7 start, now standing at 7-12.

“We have three games left before the sectional,” noted Rector, whose team plays at Southmont before hosting Owen Valley and North Montgomery to close out the regular season. “All three of those teams are playing pretty good basketball.”

Rector likes the way his team is trending right now.

“The first half of the season was rough, but the second half has been much better,” he said. “I like the way we came out and competed in this county tournament. You take one half away and it’s a different story.”

Like all coaches, Rector knows the end goal is to have success in the state tournament later this month.

“We are getting better night in and night out,” he said.”

Moore was happy with the county tournament victory, but was happiest for two of his teammates.

“It’s big,” he said. “Especially for our seniors. For Cooper and Seth [Pfaff} this is their last ride, and my last time is next year. I was really glad we could win it for them.”

He is confident the Clovers are headed in the right direction for the post-season.

“We just have to believe in our teammates and work hard,” Moore said.

Neese won the county title for the third time in his four-year Cloverdale career and feels blessed to have been able to accomplish that feat.

“It’s really special for Seth and myself,” he said “This is our last time to play in this gym in this tourney.”

The Clovers have just one regular-season game remaining, their Senior Night on Feb. 18 against Shakamak.

Neese admits feeling the effects of the impending end of one of the best careers any Indiana high school player has ever had.

“It’s a little scary,” he said. “We hopefully have a lot of wins left to go. We just want to take it one minute at a time, one game at a time and one week at a time.”

Neese thought his team’s first half performance on Friday did not reflect on its quality.

“We are a better team than everybody is expecting,” he said. “The first half didn’t show it, but the second half showed everybody what we can do.”