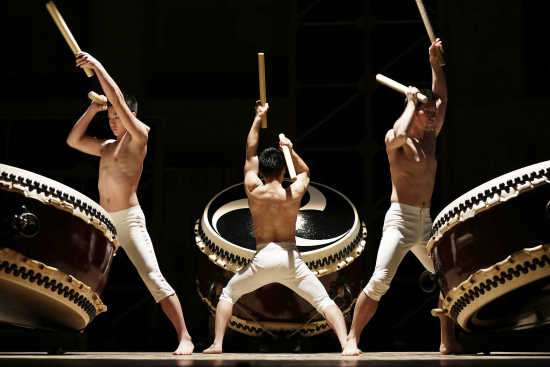 KODO's only Indiana appearance, however, will be its Green Guest Artist Concert at DePauw University's Kresge Auditorium on Friday, Feb. 24 at 7:30 p.m.

The current tour, DADAN, meaning "Drumming Men," features the company's male members and is unique among Kodo's programs. This production will use exclusively taiko drums of all shapes and sizes, as well as other forms of percussion, but more than any other program in the Kodo repertoire, DADAN simultaneously challenges the limits of the player's physical, technical, psychological and spiritual talents.

The climax of the performance will feature a succession of compelling solos, and with each new drummer's rhythmic pounding of the hirado o-daiko (big low drum), the reverberations are reputed to build to "soul-stirring heights." The solos then crescendo into a round of rousing ensemble pieces, completely immersing audience members in sound as they watch.

Described as simultaneously raw and refined, DADAN 2017 was created by artistic director Tamasaburo Bando, a leading Kabuki actor. In 2012, Bando was named the artistic director of the Kodo ensemble and was recognized in Japan as a "Living National Treasure." In 2013, he was decorated with the highest honor, Commander of France's Order of Arts and Letters.

In Japanese, the word "Kodo" holds a double meaning. It can be translated as "heartbeat," the primal source of all rhythm. If read in a different context however, Kodo can also mean "children of the drum," which reflects the group's desire to play the drums with the heart of a child.

Since the ensemble's debut at the Berlin Festival in 1981, Kodo has given 5,800 performances in 49 countries on five continents. The group also participates in a wide range of projects and events, which includes headlining major international festivals, contributing to motion picture soundtracks, and collaborating with a wide variety of global performing arts leaders.

"Kodo has had a huge impact in the world of percussion," Professor Heather Sloan, a percussionist and instructor at the DePauw University School of Music, said. "In an era of increased global interactions and tensions, Kodo's artistry not only transcends borders, but it has also played an important leading role in the world music movement, contributing to the continuing evolution of modern taiko drumming."

The special menu will be available from 4:30-7 p.m. to allow travel time from the restaurant to the Green Center before the concert begins at 7:30 p.m.

Cost of the collaborative dinner is $35 per person and $10 for the additional beer pairings. Reservations are requested at 1-844-WASSER-1.

General admission to attend DADAN 2017 at the Green Center is $15 in advance and $20 the day of the event. Tickets for seniors, youth and all students are free, thanks to season sponsors Judson and Joyce Green. Tickets can be obtained, in advance, through www.music.depauw.edu, or at the GCPA box office beginning one hour prior to the performance.

This production is presented through support from DePauw University's Asian Studies Department. Kodo also thanks Al Nippon Airways for its support of the "Dadan 2017" USA Tour/Kodo 35th Anniversary Production.

To learn more about KODO and the art of taiko drumming, visit www.kodo.or.jp.