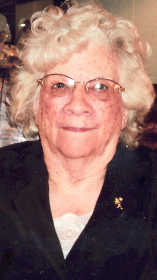 She was a 1940 graduate of Clinton Center Schools.

Elva had been a housemother for 14 years at the Alpha Tau Omega fraternity and three years at Delta Delta Delta sorority at DePauw University. She had previously worked at J.C. Penney's and Prevo's in Greencastle.

She was a member of the Brick Chapel United Methodist Church. In the 70s Elva served on two missions trips, traveling to the McCurdy Mission School in New Mexico and to Kenedy, Texas, where she helped rebuild a church in 1997.

Funeral services will be conducted at 1 p.m. Monday, Feb. 27 at Hopkins-Rector Funeral Home, Greencastle, with interment to follow at Union Chapel Cemetery.

The family will receive friends from 11 a.m. on Monday until time of service at the funeral home.

Memorial contributions may be made in memory of Elva to the Brick Chapel United Methodist Church.