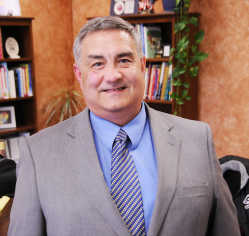 Complete with reception and much ado, the Greencastle Community School Corporation’s (GCSC) five-member board is expected to formally select and introduce Jeffrey Hubble as its superintendent during a special meeting on Monday, March 6.

Set to take place at 3:45 p.m. inside the GCSC administration offices, the upcoming public meeting follows an advertised public hearing held on Wednesday, Feb. 22 when the board opened the topic to “hear objections to or support for” the proposed contract. With no members of the community present to either object or show support, the board proceeded with the hearing as scheduled, announcing a few minor changes to Hubble’s proposed contract.

Originally advertised in the Banner Graphic on Friday, Feb. 10 (in accordance with due process), the notice mistakenly stated that, upon the contract’s official approval, Hubble will receive $40,209 for the first four-month period (also mistakenly indicated by GCSC as Feb. 1 through June 30, only to be redacted and clarified at the hearing as March 1 through June 30). However, Hubble will instead receive $41,755.50 for the aforementioned four-month period -- the reason for this being the district’s fiscal year ends on June 30, simultaneously signaling Hubble’s four-month mark.

As of July 1, Hubble’s annual base salary will begin at $120,627 in the event he receives either an “effective” or “highly effective” rating by that date, at which time the 2016-17 fiscal year will end and the 2017-18 fiscal year will commence. As will all Greencastle administrators, his salary is subject to the same increase if effective or highly-effective ratings are maintained.

His contract, if approved, will begin effective March 1 and will run for 40 months, giving him a prospective contract-end date of June 30, 2020.

Serving as interim superintendent since August 2016, Hubble initially replaced long-time educator Dawn Puckett upon her retirement after nearly four years as superintendent and almost 30 years with the corporation.

Hubble himself served as assistant superintendent to Puckett and is a 20-year veteran of various positions within the field of education and administration.

Following the expected approval on March 6 will be cake and punch, ushering in a warm welcome for the long-time GCSC administrator.

The meeting to approve Hubble’s contract will take place within the corporation’s administration offices, located at 1002 Millpond Ln., at 3:45 p.m. on March 6.

Those with questions or feedback concerning the contract have a maximum of seven business days after the Feb. 22 hearing to voice their opinions. The administration offices can be reached at 653-9771.